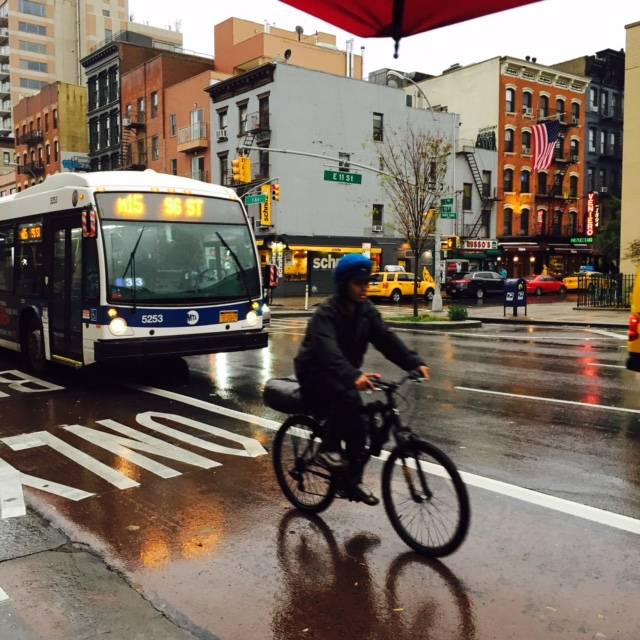 This is a crazy city, every year it just gets crazier. In the 80s it was crazy dirty, drugs everywhere, lawlessness like the wild west. I remember wincing in the back of a taxi, stopped at the light on the corner of 12th and 1st Ave, there was a small popping sound that projected a sinister bigness behind me. I looked around while ducking, two guys were shooting at each other from opposite sides of the street – bad shots obviously ‘cos no-one was hit – but they were only about twenty yards behind me, the light changed, we got outta there. Another time, cops waved people past the corner of 13th and 1st Ave, behind them you could see a pair of expensive sneakers protruding from a grey blanket, rich red blood flowing towards the drain from the victim’s head. It was a given that his death was drug-related because of the expensive new sneakers, us New Yorkers just walked on by. Forensically thinking, it had to have been be recent. Fifteen minutes earlier I might have seen it, could’ve even been shot. No-one gathered though, it wasn’t unusual enough.

Now, past the noughties and into the teens, New York is somewhat gentrified. The drugs haven’t gone, but they are less visible, more legit perhaps. But the city is still crazy.

My friend Beverly waved me into her shop one day as I was passing by. It’s a shop filled with curiosities, curious to Bev or her co-owner Sharon Jane. Antique typewriters, 50s lamp shades, jewelry, musical instruments, colourful glass ashtrays, watches and ornaments. Movie stars love to root around in there with little fuss from the proprietors: Tom Hanks and Rachel Weisz immediately come to mind. Rachel lives with Daniel Craig just across the street, I saw her outside one day when it was closed, a “Gone Fishing” sign hanging on the glass door. She’s very underdone and pretty “girl next door” looking, approachable, normal but aware that I was looking at her, no make-up, slightly exotic. Beverly treated everyone the same, bums, junkies, alcoholics, down and outs, and superstars. Bev will talk about Joseph (let’s say) in such a way that you have an image, a normal one of someone who might be even slightly industrious “Well Joseph was here earlier and he says…. “. Then one day you’re in the shop and a guy with no teeth comes in, a red kerchief wrapped around his forehead, a big clump of lumpy sweaty hair falling over it, a rough looking grey sweat suit, and sneakers that could walk away on their own “Hey Bev how are oooo?” “Oh Hi Joseph” Your mind goes into a tailspin “That’s Joseph?”  You’ve got to love Beverly … oh and Sharon Jane is the same.

One day while passing by, Bev beckoned me towards her from behind the small glass counter.

“Come ere, can you do me a favour and stand up here?”

“Can you stand up on the carpet?”

She pointed directly downward, I had been standing a little bit away from the counter cos there was a large carpet rolled in front of it, it was over a foot tall and almost twice as wide. She silently pointed down again with a mischievous grin. Bev is from a small town in England  and has been here even longer than me, we share a similar sense of humour. Eventually I copped that she wanted me to stand up on the rolled carpet. I stepped up but found it a little hard to balance, it was lumpy. Bev shushed with an index finger to her lips. I made an incredulous expression with my face. She broke the intrigue.

“Just stand there for a while”, she announced calmly for all to hear, but who was all besides us? and where were they? Bev drew up the sleeves of her black leotard, signaling a change of subject.

“So how the hell are you?”, she asked with a big smile.

“Anything strange?”, she asked, with a knowing reply etched in her smile.

“No, there is nothing strange”, I denied with an exaggerated shake of the head.

We were distracted now and the elephant in the room was underneath me. I felt a movement in the carpet. There was somebody in the bloody thing! Bev – seeing that I had copped on – asked could I stay on there a little longer. I did my best, but it was too weird.  She beckoned me outside.

She explained that this guy had come in and offered to pay her if she would allow him to roll up in a carpet and encourage customers to stand on him. It was an art project, she explained.

“Yeah, right” said I, and we both laughed knowingly.

This is a crazy bloody city, who would live here?