Surrender to the present “now is heaven” 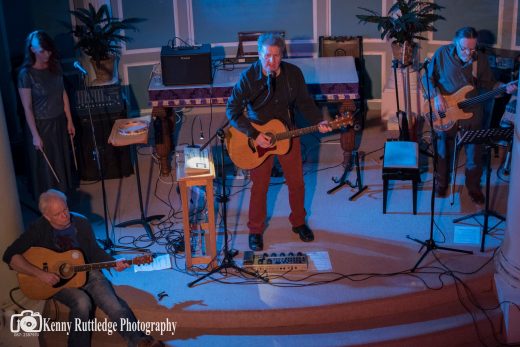 St Iberius Wexford Dec 3rd 2016 with the Irish Ensemble: Mick Egan in the front, behind him Paula Cox, on my other side Garvan Gallagher, and up overhead on the organ, facing us Josh Johnston.

My legs were stretched out as far as they could possibly go landing smack bang before the heart of the blazing fire. It was comforting on my feet to feel the heat, and the stretch felt like I was pulling on a knotted rope, trying to get it untangled and straight. But it didn’t work! Something was tight in my gut and I couldn’t unravel it. I had been subconsciously aware of a discomfort before, but now it had gained a new priority of direct awareness, I began to ponder why? We are all aware that tension is insidiously dangerous, but sometimes it’s impossible to even recognize, at least I seem to have learned how to do that. Once these thoughts registered with myself it became time to launch an investigation.

“What was causing this?”

I couldn’t fix it without figuring out what it was. The last book that I read since attending the school of Practical Philosophy in New York’s upper west side taught me to recognize the power of being present; not dwelling on the past or living for the future. It claimed that most of our depression and pain is derived from this manner of thinking. And that we think this way because of our ego; that voice in our head running a constant commentary is our ego. The idea is to notice that voice and shut it up as much as possible, by focusing on where I was then and what I was doing.

I could see clearly now that that was what was wrong with me! That knot inside my stomach was a knot of anticipation. I wasn’t present. I was only partially listening to Clare talking, only partially aware of my surroundings or where I was, no I was waiting for the gig on Saturday night, then I would let go, and give it a hundred per cent, then I would allow myself to be free and happy. How ridiculous it seems when it’s spelt out, but it’s the truth. Then I decided to try and do something about it, easier said than done.

In reading that book “The Power of Now” by Eckhart Tolle I had found myself facing the greatest challenge to everything that I had come to know. Eckhart presents a very solid case; he says that our ego is the cause of all our insecurities and tensions. That voice in our head says “what about me?” and we become insecure immediately because we think that we are not getting what we deserve. In my case on that evening it was saying “This is boring, this is not important, the important thing is tomorrow night, I just have to put up with this horrible time in between, prepare myself for tomorrow” On these occasions the book advises to surrender to the present, if you are always present at all times, all times will be important, not just the chosen moments. He says desert that voice, that ego, walk away from it , reject it. By Jasus that is like saying goodbye to yourself, of course it’s not really yourself, it’s just this bloody thing we develop with time, a companion for to entertain us when we are alone. The problem is; the more attention you give to it, the more attention it demands, starts off with “where’s my bottle?” as a baby, and grows into “I deserve better than this” It wants to talk to us when we are talking to someone else, it wants to talk to us when are working, distracts our attention when we are watching a movie, when we are trying to sleep, it never stops. I was aware of this before, but no-one had ever spelt it out so clearly. So now I am at war with the bugger, everything that I do, no matter how mundane, I focus on that thing only and try to shut out the commentary. I am definitely feeling steadier for it. But however, some things overwhelm me and the bugger slips in when my guard is low, like the other night!

So I dropped my weight into my feet and surrendered to where I was, tomorrow would look after itself, especially if I look after the present. I felt this calm come over me like pleasant pins and needles, I sank into the chair and smiled. I was stronger for not carrying that knot in my stomach and that weight on my shoulders.

So my lovelies, Surrender!!!! to the present, now is heaven. Love Pierce x