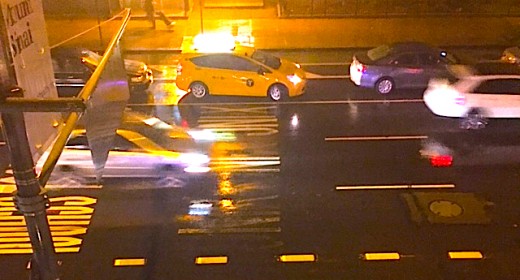 The mood was jubilant driving away from Coughlans of Cork on Thursday night. The gig had been sold out and extra stools had to be employed to make use of every nook and cranny, getting on stage was even a maneuver, getting off was even harder. The atmosphere was magic and I could’ve sung any song really, the more obscure the better, even the new comers seemed to know them.   When the audience sang, they sang out without hesitation, and when they laughed I had to wait for them to stop, and when it got deep, they dove down with me to feel what was there; magnificent people. So the mood was jubilant as beaming Mike and I drove delightedly away up the one-way Douglas Street in the opposite direction of the determined way for everyone else. Cars backed up to get away from our unfettered advance, as we breezed ahead to the nearest turn off heading down the hill towards the quay. After our usual quota of getting lost, our chronic lack of direction became overwhelmed by our unbridled enthusiasm, and we somehow got taken to the Waterford road by a series of one-way streets that seemed to have been designed to ferry the likes of us in the right direction, in spite of ourselves.

It was all going swimmingly as we pulled out on to the open road, with David Bowie’s “Let’s Dance” blasting out on the stereo. Mick, the sound man at Coughlans had told us we would encounter a garage pretty soon (we needed fuel) and we should keep an eye to the left. Sure as shit there she was coming up on left, bright clean lights shouting out “we are open”. I was ravenous, and went straight to the Indian gentleman behind the bullet proof glass to enquire about sandwiches. I could hear Mike humming away as he rammed the pump into his car and fiddled with the screen read out.

“Hi, how are ye? Do you by any chance have sandwiches?”

“Yes we do indeed”

He was a young friendly man with an strong Indian accent, but I could understand him clearly enough as his voice squeaked out through the tiny speaker below my side of the counter.

“Would you have tuna by any chance?”

“I have” he replied unhesitantly to my surprise.

“Could I have it on brown bread?’

I couldn’t believe my luck as he nodded in the affirmative.

“Great I’ll have a tuna sandwich on brown bread and a lucozade please oh and hold on” I shouted over to Mike as he delightedly gazed at the sky humming even louder now while allowing the nozzle to administer the much needed gasoline into his car’s receptacle.

“Mike! Would you like a sandwich and a coffee or something”

“Oh, just a coffee will be fine Pierce, with milk, thanks! ” Mike is not a needy type.

Off went the young teller, confidently around the floor of the fair size store, knowing exactly where everything was and returning in no time with all our needs in a white plastic bag. He added the cost of the petrol from pump number 2 to the bill, and I put a fifty euro note in the drawer which he had shoved in my direction. He calculated the change and pushed the drawer back to me with the bag of goodies and the coffee standing up in a carton along side the change. Mike was already in the car and as soon as I hopped in we took once more to the Waterford/Wexford dual carriageway, with gusto.

“This is very nice coffee I must say Pierce, and Hassy back at the bar gave me a gorgeous cup of coffee at the end of the night, wherever he got it from, I think they had a machine”

Mike had now progressed from humming to singing the words (almost) to Bowie’s “Ashes To Ashes” I was delighted that I had brought that box set along, as I prized open my sandwich packaging in the dark, and shoved it enthusiastically into my gob. Ugh, I thought

“I don’t know what the fuck is in this sandwich, but it’s not tuna”

Mike put some light on the subject, there it was, a ham salad sandwich in cold white bread, a sloppy rag type of white bread, the kind I really hate, with ham (which I don’t care for either) tomato (Bad in sandwiches unless eaten right away, they make the bread wet) a lot of mayonnaise and a bit of lettuce. Christ, did that guy understand anything that I said?

Mike became silent, he stopped humming, he caught my attention.

“Ugh , hmm, that’s a bit odd, she’s chugging” said he, with an uncharacteristic tone of fright.

“ I ope I didn’t put petrol in instead of diesel, cor blimey!”

“Well didn’t it say Diesel on the pump that you used Mike?” I ensued with the calmest voice I could muster, as the car began to lose pace.

“Well, I didn’t really look, the nozzles are supposed to be different sizes, I presumed it wouldn’t fit if it was wrong”

The car was now slowing down and Mike could see his life flashing before him, and in it he saw a green pump (which represents petrol) not a black one (diesel) he now had the presence of mind that he didn’t have back then, his heart sank visibly as he pulled into the shoulder. The car was now screaming out visual alarms on the dashboard “FATAL FLAW !!!”

We had been driving in the fog with low visibility, but now the rain began coming down too, beating heartily against the glass, as the winter wind of the Irish countryside howled around the car. Only five minutes before, we had been driving along in the lap of luxury with Bowie singing and the heater warming the cockles of our heart. Now we were pulled over by a tall wet stone wall in the dark, hazard lights flashing, music halted by the car itself “POWER ECONOMY!!” it now flashed. It dawned on us both that we may not be going home that night, it also dawned on us that we hadn’t the foggiest what to do. It was 1.30 on a Thursday night, everyone would be in bed. Cars and trucks flew past at such a pace, we could feel the car rock from the pressure of their wind.

“They can siphon it off”

I imagined someone sucking a hose (the way thieves do to steal petrol) in the pissing rain with the wind blowing in four directions and trucks flying past so fast they were bending the grass, I was dubious to say the least, we might be doomed.

But Mike was right! After we were piggy backed on the phone from the police to their break down crew, through to their suggestion of someone else because they had to stay on duty, to another guy who was 40 minutes away , to someone else who was 20 minutes away, a big beautiful yellow van with flashing lights appeared in our rear view mirror, oh the brotherhood of man, hallelujah!!

This van, and this man, had everything. He insisted that we get the car way in off the road, he got his shoulder to it and just pushed us in, while I sat there like a twat. I got out as soon as it stopped and introduce myself. He grabbed me by the arm and pulled me in.

“Mind yourself! this road is fierce, they come flying long here shur, ye could be kilt in a flash”

Then he opened up the back of his van, upon opening the door it automatically lit up like an operating theatre on wheels. On the floor in the middle of the very efficiently organized pumps and other gadgets was a big white tank with Gas Scavenger written on it. Sure as shit that was for sucking the rogue petrol out of the diesel engine. All I could think as I sat there – cold enough now – was Mike’s mistake must be common enough. After sucking all the petrol out, and some cajoling with the cylinders or something like that for about a half hour (not sure what they are called) we were repaired, and the Cork break down man sent us off flying towards home again. David Bowie was on “China Girl” now and Mike began to hum again.

“Isn’t that an Iggy Pop song?” I offered.

wonder what little surprises Limerick has in store for us on Monday night (dec 12) at 1 Pery Square?