1 Wedding 1 Cat and an Organ 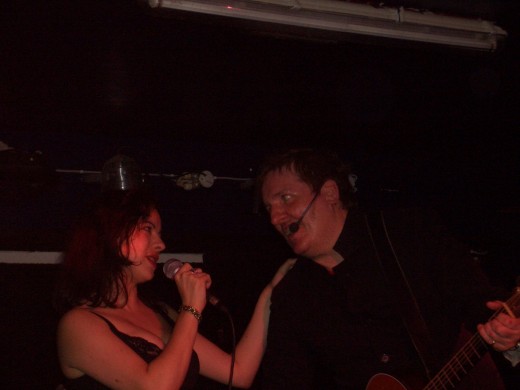 Mike’s cat sleeps in the back of his car, he parks it around the back of his house somewhere down around Rathangan in Co Wexford. He was having a cup of tea on our sofa when he relayed the story about his new car and the cat in his thick Manchester accent.

“I ope no-one is aleer-gik”

I looked at Clare for a minute and wondered about her allergies, they hadn’t been so noticeable of late, but of course we don’t have a cat in New York. However, we’ve been in Ireland for a couple of weeks now and our cat Albert (shared with a Wexford friend) doesn’t seem to be affecting her. So we all tittered in union, and brushed the question aside.

On Friday at one o’clock everyone congregated at our Davitt Road bungalow for the trip to Dublin and after we loaded the gear into the back of Mike’s car we all piled in. I bagged the front passenger seat hoping for a nap. Clare, Paula and Mick, slid into the back (where the cat sleeps) and off we went to Dublin for our show at the Dublin Unitarian. Late the night before, Josh Johnston the organist had slipped into his text a small bombshell, the church had accidently double-booked a wedding rehearsal at 6 p.m. during our planned soundcheck. This is typical of the stuff that happens when you are playing in churches. “Nightmare!” I replied, Josh wrote back that we would start at 4.30 and have plenty of time, and if needed we could resume after the rehearsal at 7.15.

“If everything goes swimmingly Josh, that won’t be a problem, but the doors open at 7.30, what if something goes wrong?” We hadn’t played together yet as a whole unit, I had rehearsed with Josh on organ and Garvan on bass at the church, and with Mick on guitar and Paula on vocals and percussion in Wexford, but we hadn’t played together as a unit yet, the soundcheck was going to be the only chance. I had this kind of thing before and knew how to pull it off, but a wedding rehearsal in the middle of it? Yikes!

We pulled up in front of the church at half three, unloaded and set up the equipment. The heat had been on since ten in the morning because during the rehearsal on the previous Tuesday we found that the cold front blowing down from the North had lowered the pitch of the organ by a ¼ tone. The organ tuner had advised us to put the heat on early with the hope that the organ would move up to the standard A440 pitch by gig time. It wasn’t exactly boiling in there at half three, but the edge had been taken off of it, and Josh excitedly greeted us on the church steps with the news that the organ was going upwards, only two cents below 440 now! By the time we began playing it was only one cent below. Of course we could always tune to the organ, but the bloody piano still stayed at 440, we had only one tune in which both of them played “Sorrow is a Solid Feeling” I had already begrudgingly restructured the set with its exclusion, just in case.

At around quarter to five we were ready to go, so we checked the organ once more, we tried playing “Sorrow” and it seemed alright to Garvan and me , Josh didn’t seem as happy, but I figured if it didn’t hurt Garv and me, it couldn’t be too bad. We began rehearsing and checking the sound at the same time. It was sounding good and we were just about to hit another song when I noticed a change in the atmosphere. A frumpy looking woman in her fifties with a forward keel, and a “here’s me head and me bum is coming” posture, swung her brown handbag like a weapon as she busied across the aisle. I suddenly became aware of her and was clocking her Michael Caine glasses and Clancy Brothers cardigan more than anything else, when a second dawning came upon me (Josh and the sound man Kevin – who lives and works in the Church – had gone into a state of reverence). Of course, this was Bridget the Pastor, and the four people behind her giggling, were the wedding party! Without much being said we all laid down our instruments in surrender and sheepishly crawled away to the basement cum dressing room.

At five to eight Josh went up to measure the organ again, it was a ½ cent short of the target. I put “Sorrow” back in the set. And we lighted the stage for a blinder.

On Sunday Clare woke up coughing a weird kind of dry cough, unlike the ones we both had when she had a chest cold the previous week.

“What’s wrong with you?”

She was wheezing, I found her inhaler.

“That’s odd, why are you wheezing now?”

“Mike’s cat!!” It dawned on me, he slept in the back of the car where Clare sat going up and down to Dublin, Mike leaves the car window open for him so that he can get in and out. Jays, we’ll have to give it a good hoovering before the long drive to Scotland.   Mike will be amused.

Now for the Wexford gig at the St Iberius next Saturday Dec 3rd where the 150 year old organ, with the sweetest sound, tends to hover around 5 cents sharp of the desired pitch, all 1350 pipes.

Synthesizers are for wimps, this is a real living thing. Love Pierce x