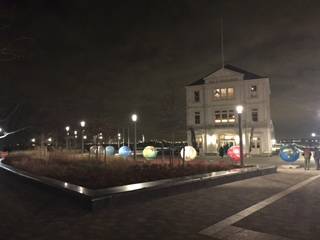 The black waves are crashing against the jetty, far off and silent. I’m reminded of my childhood when we lived on the quay opposite the New Bridge in Wexford. Ferocious nights when the wind spat the wooden works up like matchsticks, and all that lay between us was a couple of curtains and a single glaze window. It was a melancholy meditation for my teenage wonderment, what was this feeling of dark mystery that came with the wind and rain from out there where the fish and birds felt at home? With the curtain resting on his head, Sputnik would stare out there with me, he seemed to wonder too, and we were at one, Sputnik the dog, me, and the whole out there. All the loneliness of love and forever came to dwell in my empty mind, and a feeling of homesickness in the hearth of home itself.

Now I am not there anymore, now I am an American, now I am in a fancy new place called Pier A, staring out at the Statue of Liberty with my wife Clare by my side. It is the launch of the Irish American Anniversary celebration for the 1916 Rising. There are hundreds of people here, mostly mature, well-heeled Irish or Irish-Americans. A band plays Irish trad tunes to accompany the nervous chatter of small talk, the booze is free and fine appetizers are proffered plentiful by attractive maids and men. I can see that Clare is exuberant and I want to be too, but I am looking out the window at the yellow lighted Staten Island ferries criss–crossing, and the coal black waves chewing at the small wooden boardwalk where I imagine summer libations are served. Clare is trying to shake me out of it, and I want to, but I can’t. God I’m a miserable sod, I can’t look back into the crowd; I have to stare out at the starkness. I am ready to scream, what the hell am I doing here? I don’t know anyone; they don’t even seem to know each other, what is the point? 1916! That was so long ago, and as much as I admire those people that died for Ireland, I can’t feel anything for them now. Isn’t this just another piece of bollox where people are hustling to make a few bob out of history.

The ceremony begins, Barbara Jones the Irish Consul makes a genuine plea for silence as she introduces a lady who will sing the Anthems. The first strains of the Irish National Anthem stir me to attention, this woman sings her heart out, some people join in, I do too, the air in the room begins to change, I find myself looking into the room instead of out. She turns to the musicians for a note and launches into The Star Spangled Banner, it’s high, really high, I know what a mother of a song this is to sing, and she’s started really high. But she seems unperturbed, I trust that she would know if she was in trouble, people begin to join in, the band plays support, she goes for the end “the land of the freeeeeee” and I swear she won’t make it, but she does, she nails it with a very lilting Irish traditional, slightly nasal vibrato, but from the chest, the hairs stand up on the back of my neck, I look around the room and realise,