Astonished by the sun

Just got back from a couple of gigs in the West of Ireland.

Hit Cork City, then drove south west to Ballydehob, or as I call it, Ballydequityourjob!  ‘cos it seems like most people who live in this idyllic little haven have moved there with the wisdom of a Buddhist Monk.

I am sure that the waiters in the little café across the Street from Levis Corner Shop, were hording PHD’s in their biscuit tins above in the attic.

Joe from Levi’s found time to run this great spot, share the minding of his beautiful daughter Johanna, one year and three months old, going on PHD.  His wife Caroline had a lap top attached to her as she levitated around with the calmness of a Ballydehobian, doing some kind of computer work and minding Johanna, as well as helping with shop. Joe’s Mother Joanne, always seem to be leaving as she was staying, and you’d be mistaken to think she didn’t have the run of the place.  I asked Joanne could we put the TV on to watch England playing Sweden.  Caroline, Joe and little Johanna were at the Farmers Market in Skib (Skibereen) and like all TV’s, their TV didn’t like strangers trying to turn it on.  It didn’t even recognise Joanne. 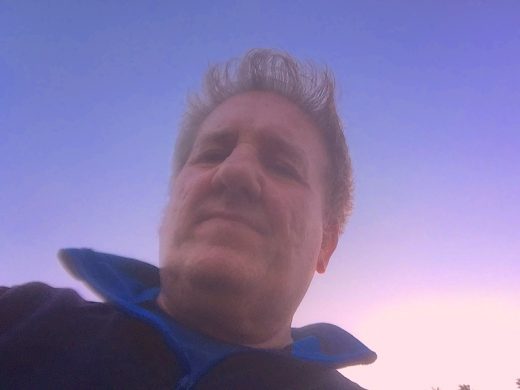 (Astonished by the sun)

“Ara don’t worry about it Joanne” said I, picking up the Cork accent.

I really didn’t want her to go through all this trouble for me, and didn’t want to interfere with Caroline and Joe’s fun at the market.  Mike and I went in to set up the gear for the gig, Joanne kept fiddling away, she was intent on sorting this out.  We were hammering out my loudest song “The Sky and The Ground” with the drum machine at full wallop, when Joanne came in a said how wonderful it sounded, because she is a Mammy, I half expected her to recoil from the volume, but no! she loved it, and said I should stop while I was ahead.

“You’ll be worn out”

Off she went inside to have another go at the Tellee.

It was 3pm and they were singing God Save The Queen.  I made up a salad and sat down to watch, thinking how great Joanne was for going through this much trouble for Mike and myself.  To my surprise Joe’s Mother sat down too, folding her arms she became engrossed with the proceeding, she meant business.  I wondered how long she would last, she lasted!

“Ara how could he miss that?  He shoulda just kicked the bloody thing.  Ah shur he’s way off side for God sake”

He was! And the bloody Ref didn’t even see it.

The Sun continues to be lost, it must’ve confused Ireland with Spain, dementia I believe.  Long may its little happy head be muddled, for we are a gladder people, if this goes on we might even play like the Spaniards and win the World cup.

Next week…Wexford, the centre of the universe.  The beautiful Green Acres even has Air Conditioning, not put in there for us mind you, it’s for the Art, but we get to use it anyway, so cool beer and wine with cool air.  I’ll have something new for you, and we will sing Orange Coloured Sun in the summer of our lives.

Two more gigs added just added, The AKA Kilkenny Arts Festival in an Elizabethan Pub called The Hole In The Wall, only holds 50.  And an ancient Church in Cellbridge Co Kildare – where they serve free wine on a grass covered mound mingled with ancient gravestones, as only the Protestants could.

I love you more than I can remember.

The Green Acres show will be dedicated to my dear friend Michael Carroll who sadly died last month, still a young man-Michael helped me hugely through I.T. snaggery he was such a special person.  And to his beautiful young family who must be so heartbroken.

We love you Michael-hope you are getting to the bottom of one of your great passions; the paranormal.

The Hole In The Wall -The AKA Kilkenny Arts Festival Aug 9th-9pm Tix at tickets.ie

There are 2 comments on Astonished by the sun