A Day without speaking 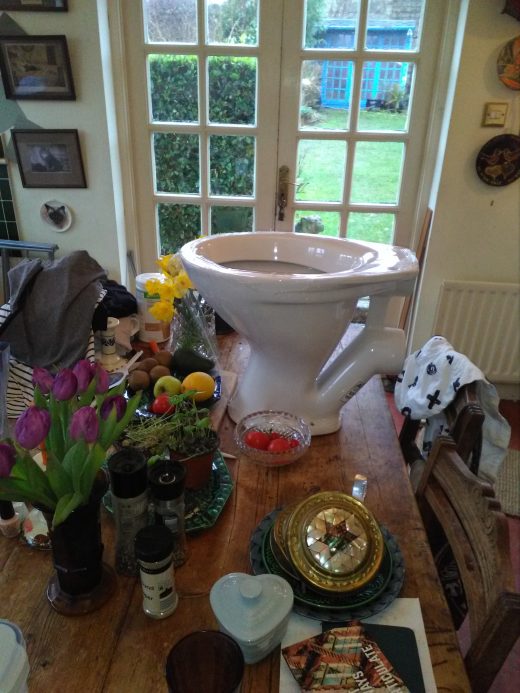 I always wanted a toilet in the kitchen

Six days before my gig in Glasgow last week I came to the realisation that my voice was not ticketyboo (English term for not right) I had gotten through the Christmas bronchitis by a hairs breath, with a lot of cautious behavior; ie. Not much drinking and as little talking as possible, talking is the worst thing for our voices, no, actually whispering is even worse. But that was behind me then, and I should’ve been handily on the mend. I googled my new symptoms to see if I could fish out a clue, and came away with the conclusion that I might have laryngitis? Apparently it was going around, my Sister in Law said that her grandchild Emily even had it, aged six! This Town has been a bag of bugs this Winter, everyone says it’s not cold enough. No morning frost on the grass to kill the germs. There was only one immediate cure; stop talking. On Saturday night I broke the news to Clare, I wasn’t going to talk the next day at all. I thought she’d be happy, but she kind of groaned, probably because it seemed so nutty, or perhaps because it would make Sunday even more like SUNDAY. But I was adamant, I had to get my voice back to speed, it was so depressing to sing like this. I had tried doing this before and didn’t go through with it, this time I would prepare. Before I went to bed I put my notebook and a pen on the bedside table.

Clare awakened early the next morning and in an effort to let me lie in, slipped quietly out to read in the sitting room. It musta been eleven when I opened my eyes. I could hear Clare talking to Albert.

“I saw you looking at that big ginger pussycat Albert, is that why you’ve been asking to go out a lot? I think it is! I bet your jealous, that poor pussy was minding his own business”

This moment of lying there listening gave me time to remember before I forgot, that I was not to speak. I reached out for the book and pen, Clare heard me stir and peeped in around the door. By then I had already written my first words in the book (my first day of silence, since I had learned to make sound btw!)

“Saw the ginger cat, he was afraid of Albert” I drew a cats face with whiskers next to it.

Clare’s face lit up with amusement, I had scored big time. Not only did it make the silence funny, I was also on her favourite subject; animals! I had not mentioned seeing that big ginger cat until now, and she was amused that Albert was guarding the premises. Clare mimicked Albert’s expression by raising her shoulders up around her ears and pushing her nose forward mocking a threat.

“He’s all ssshhzzzz” she said as she made the face.

“Minding the Garden….I know, he thinks that’s his job”

It dawned on me that writing down stuff, could be funny.

I wrote another note in book and tapped on its hard cover to get Clare’s attention.

“Are you taking the piss now” she teased. I realized now that I could ask for things on paper easier than by mouth.

“I’m going to pop over to Pettit’s mall to get the Sunday Papes, do you want anything while I’m there?”

Once again she was looking the other way, so I clapped my hands. Clare took the book and wrote down.

“I am going to TK Max to get a T Shirt and can go to Pettits after!”

“For fucks sake, that will take ages” I wrote

“ I wont be that long, I know exactly what I want, I’ll be in and out” she said with her mouth.

“Good” I wrote down.

She picked up Albert and put him on the bed next to me, he started kneading the silk eiderdown (the house is full of antiques) he was purring profusely and seemed to enjoying this silent communication. After all he uses this method successfully all the time, to great effect actually now that I think about it. If he wants to eat and I’m ignoring him, he will start scratching the good sofa. He gets what he wants by using signals; if he wants to go out he’ll sit quietly by the door and just stare at me. Because I know he can’t speak, I’m often on the look out for what he’s up to. Clare didn’t exactly get to this level with me though. I often had to bang the table or tip her on the shoulder so that she would see my notes. Sometimes I just let things go, they weren’t worth the trouble. Of course then there are no arguments, no corrections or disagreements, just vital stuff in Pigeon English. I have the book right before me now, another advantage, there is a record of what you say! (good or bad??) In the book there are things like.

“will need Pounds for S-land”

“Do I need a Scottish long distance number to call Glasgow-in Glasgow?” I am stupid about this kind of thing. The answer is yes btw.

The next morning I published my new Monday Morning Milk on time, I had the whole of Sunday to write non stop. As usual very few people responded, but I know you are out there reading this, every where I go people casually mention something they’ve read in here, just recently a friend from Australia said so. Who has time to respond?

My voice was much cleaner the next day, I could see that it paid off. It wasn’t perfect, but a lot better. Through the rest of the week I still tried to use it sparingly. I hardly spoke a word on the way to Dublin for the Glasgow flight. As soon as I got there a Taxi came for us (Mike Raftery and myself) and whisked us to the Glasgow Concert Hall. The place was hopping with a beehive of activity, the vibe of the Celtic Connections Festival was omni. The young lady at the front table gave us our badges and meal vouchers, and took us to the exhibition hall where the Scottish quartet were waiting to rehearse by a prepared electric piano. I spoke aloud for the first time in ages (I had to for Jasus sake) explaining that I would not be singing out, just enough to guide them through. They were extremely sweet and assured me that they were sympathetic. I almost forgot that I was in Scotland, I looked at these four lovely women with their gracious smiles, and remembered to forget the rest. I gave them each their book of music, and we began to play, it was perfect, they were superb! What a relief.

The show in the Tron Theatre was completely sold out, and a lot of people even flew over from Ireland. My niece Jennifer and her husband Diran came up from Cobham. It was comforting to see them all in the front. The time had come to unleash my voice now, hopefully it would be alright, no more taking care. The string quartet had not really heard me sing the songs properly, so it all unfolded before their eyes in the same way as it did to any new comers in the audience, which made for an extra magical atmosphere. The voice held up well, considering I could barely talk six days earlier, all because I didn’t talk at all, five days ago.

Not talking was different, funny things happen, you should give it a go.

love (to hear from you) Pierce xx

I will be at The fabulous Seamus Ennis Centre Naul Fingal Co Dublin Saturday Feb 4th –last date this tour.