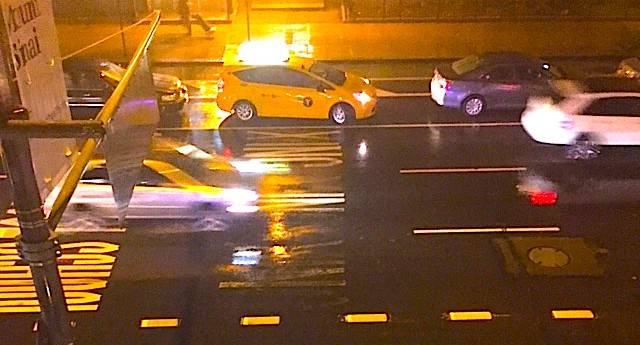 The readout on the colourful dashboard read 110 rpm and I had the level up to 12 where it usually is. I was cycling at what seemed to be full pelt and took a moment to observe my own sincerity. Then, looking over at my neighbour’s bike to see what he was doing, his rpm was 39 and his level was 6 – he was pedalling slowly and as he pushed his glasses up on his nose he seemed distracted and uncommitted. It was then that it dawned on me that I was giving it a thousand percent, and he was definitely not. Being in a stationary position with nothing before me but a black and white gym full of sweaty men I allowed my mind to wander.

“Ye know, I do always give it a thousand percent!”

I hadn’t thought about this before.

“Could this be a blessing and a curse?”

Every time I play a gig, I give it a thousand percent. It doesn’t matter where it is or how large the crowd. I give the same to Carnegie Hall as I do to the Parish Hall. I rehearse like a maniac, and get there four hours before the show to do a lengthy sound check, so that the sound is as good as possible from the first word out of my mouth.

But I don’t perform that often! Could it be that I am afraid to take on too much because I know that I will have to give it a thousand percent? I remember being at a gathering one evening here in the Village with two famous writers (I wasn’t going to say who, but why not – it’s only a blog) – Philip Glass and the play/script writer from England, Christopher Hampton. We were celebrating Chris’s play opening on Broadway, he already had another one “God of Carnage” which was hugely successful, now he had two. Chris looked stressed, like someone was chasing him all the time, his shoulder-length hair looking stringy and vitamin-deprived. Philip was calm like a duck, but maybe pedalling like mad underneath the water.

“Do you guys take on stuff when you are already up to your eyes with other commitments?”, I pried, half-knowing the answer before receiving it.

“All the time” said Chris, with a resigned shake of his head.

Because he gets hired to write film scripts – he wrote the hit movie “Atonement” – he tends to take on these high paying jobs while he is also working on his own stuff. Movie scripts are notoriously difficult, not only is the director on your back, the producers are vetting it too with $ signs pre-empting every thought.

“I ask this question, because of late I am questioning myself and my achievements, I really don’t take on more than what I can do, could that be holding me back?”

Asking this of two people who are really successful was pretty clever of me, no?

Phil just observed, and appeared to be addressing his own response tacitly (And yes I call him Phil, as do all of us).

But now I wonder if is it is smart. What would happen if I just bit the bullet and didn’t worry about the consequence. Possibly I might have to give up on the thousand percent. But might this change my world for the better? Could it be possible that I would end up doing more things and keep the standard up to a thousand percent also? Jesus, if I did I could rock the world. And all those people that are not sure about me, might say “Jesus, you’ve got to hand it to him, he’s a bloody hard worker”. As I ride the stationary bike, I think – that stuff doesn’t interest me, but I am fascinated by the notion that not worrying about my standards could free me to be more alive.

I lean down on the bike and ride like a bastard, bringing it up to 130 rpm. I am now almost at 7 miles, that’s how far Curracloe Beach (featured in the movie “Brooklyn”) is from Wexford Town. I am at the Asser Levy Gym on 23rd and Ave A surrounded by poets and painters; all who seek to reach a thousand percent at what they do. None of us appear to be rich, yet many are well enough known artists in their field. It may be that we are all there in this public gym because we will not take on more than we can handle at the standard we believe to be 1000 percent. No?

Don’t be surprised if you see me out there more often in the near future. I’m sure you’ll call me on it if it’s less than a thousand percent.