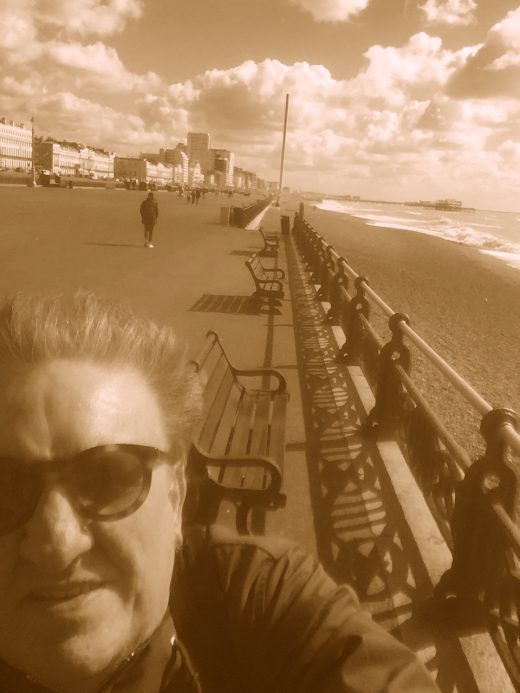 Blown away in Brighton.

I grew up by the sea, it lived across the road from us on the quay, upstairs in the sitting room with that blazing fire at my back, I often peeked past the curtains at its commotion.  From my bedroom on the third floor the seagulls announced the dawn with their yelps as they circled the Dutch coal boats in pursuit of their morning slop.

Now I am in Brighton U.K. where the seagulls play a much bigger part than they did in Wexford.  Their announcement of the dawn is like the sound of an advancing army, thousands of yelps, squawks and baby squeaks of laughter, many Brightonians would like to mow them down, or make them wear diapers at least. Sometimes you can hear the blood- curdling Banshee-like wail of a Fox as she fights with a Mammy Gull, I am told the Foxes go after their babies, and that sometimes the Gulls go after the Fox cubs. I go out and there is a baby Gull standing on the roof of the car, right in the middle, like an ornament.  I know it’s a baby because it is not white yet. They are beautiful animals, but they leave their mark everywhere, long brown splatters mixed with subtle feather clings to almost every available glass surface.  Shit- upon windows are more common than untarnished ones.

Down by the beach (if you don’t presume a beach to mean sand) they stand still in the wind, like a suspended sculpture, it feels like you can reach out and touch them, and they seem unperturbed by that possibility, a live animal meditates within arms length, floating into the weather.  I retreat to the café (pronounced Caff here) on the waterfront, there guarded by canvas windbreakers I consume a sausage sandwich and a cup of tea and think of what I should write to you.

I miss my American friends, how are you?  I will be back in January; I look forward to seeing you.

If you are in England, I have a great gig coming up between here and France. November 2ndat Crazy Coqs in Picadilly Circus, the very heart of London-this is one of England’s great venues with a Grand Piano on the stage, it is the English version of Manhattan’s Joe’s Pub.

In the meantime I am writing and sleeping and looking and listening.

And I still love you more than fish……. and chips.  Pierce  xxxxx

Also I am heading back to The Hot Spot for a follow up to the last great gig there, tickets at the Hotspot- On Dec 7th.  And Greenacres for a home town Christmas gig on Dec 28th tickets at Greenacres.