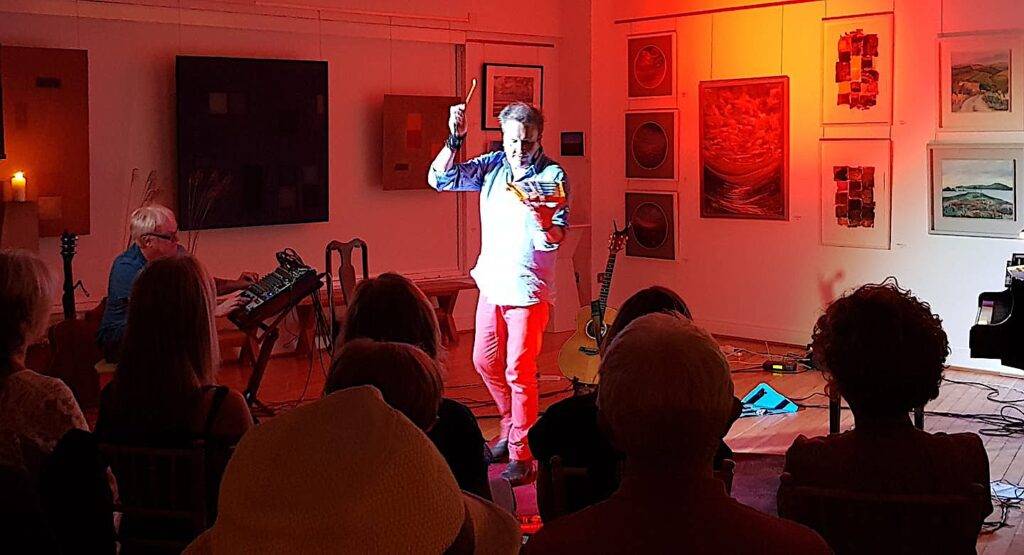 I’m going around here, where am I going? Nowhere! I’m just looking for a place to stop, a place to park. It’s Christmas time in Wexford and the town is swamped with cars and dogs and buskers and shoppers, and them Christmas songs pouring from little horns overhead. There is an ice skating rink on the Quay, and a children’s choo choo train on wheels, all lit up and sparkling, only the bored driver sits inside, but it goes around just like me. I dropped Clare off in the Bull Ring, the most central place, and went off looking for a parking place. I have a gig here in town at Green Acres, that’s on December 28th.

I drive up Cornmarket past Paddy Kelly’s furniture shop, it’s been there for decades, they used to sell clothes in there too. Manly stuff -wellingtons, corduroy trousers and sports jackets. Every summer my father would require a pair of summer trousers and a new sports coat, clothes suited to the hot weather (sic). However he was a bit shy about fitting things on, so my mother would go there and order an assortment to be sent down to the house. He would try them on in the kitchen and my mother and sister would pass comment, it was a common practice all over town.  Lovely people the Kellys, they seem to be surviving with the furniture thank God.

I go back down Abbey Street past Whites Hotel, nice decorations in the bar, not that many in there though, down past Selskar Abbey from the 1100’s (no roof now, for tax purposes) and shit I’m off on the one way street roundabout again, back down past Dunne’s and on to the Quay again.

There’s a spot on the right-hand side going in the opposite direction, but I can’t swing over there because so much traffic is coming off the bridge. And on I go, shit I’m going up past the Bull Ring again – I am sweating now from a singular position.  God I have got to get rid of this car, I would do anything, and if someone said ‘you can park here but you can’t have the car back’ I would say ‘OK’ I swear.

Are you coming to Green Acres?  If you are home for Christmas and live within 40 miles, I expect to see you. We have a grand piano on stage and an upright out in the audience, Mick Egan will play guitar with me and we’ll sing together, and laugh and drink all kinds of fancy wine and beer, work off some of that dinner in the process.  Back to New York at the end of January with Joe’s Pub on March 17th.  That’s one of the top five venues in America, in spite of the humble name.

I love you more than Paddy Kelly’s.