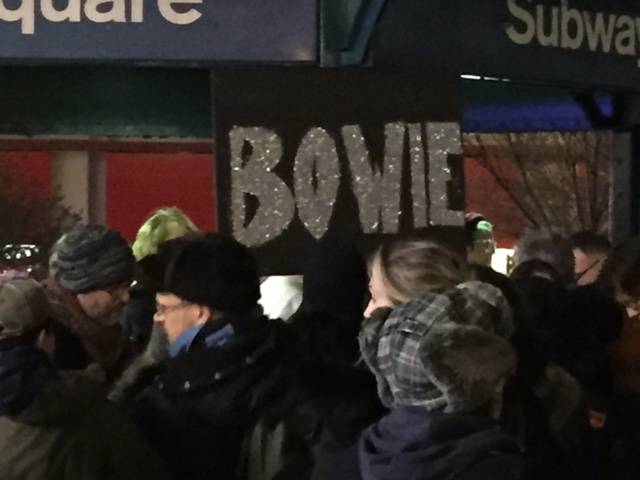 There was a sing song of Bowie’s songs in Union Square on Friday night – a young attractive crowd seemed to know every word.

David Bowie is dead, and New York is reeling. Bowie’s effect on the city was similar to that of the writer-performer Quentin Crisp – another transported Englishman of note – but seeing Quentin Crisp wasn’t such a huge conversation piece, a Bowie sighting was reported with wide-eyed glee and hugeness. It was akin to saying you just saw President Obama on St Mark’s Place eating a slice of pizza. Descriptions flew around with abandon: “he was very old looking” “he had a big hat, and looked frail but smiled sweetly” “he sat quietly at the end of the bar and nursed a pint of Guinness while he stared into thin air”.

“There was a big kerfuffle by the small round table at the door, the waiters fussed and everyone stared towards the light that came sneaking in past the curtain when he and his entourage entered” – this is how my friend Lori described Bowie’s attendance at one of my gigs in Joe’s Pub over on Lafayette Street, not too far from where he lived (we now know) on one winter’s Saturday night. Apparently there was a little too much fuss – or it was too crowded – or he didn’t like the music – but they left after a few songs. This was my second brush with the great man, and in both cases he slipped in and left, leaving nothing but a story for me to pick at in search of more-ness.

The first time was a long time ago when Larry Kirwan and I had a band called Turner and Kirwan of Wexford, he being the K and I being the other. We had been trying to get a gig for ages at a hip club uptown called Hurrah. It was a very cool venue, one of THE venues in Manhattan for new wave music at the time. The snobby booker wouldn’t entertain our advances for a second, in spite of our reasonably high profile (the top station in the City W.N.E.W FM was playing our self-produced album to death). But eventually he grudgingly complied, giving us the worst day in the week, Tuesday!

We had a loyal following, and 150 of them turned up that night regardless of the inconvenience (youth is a great leveler) – however in a club that held 800 or so that didn’t look like a lot of people. It was shaped almost like an old fashioned ballroom, and our loyal friends sat around by the walls on the cinema style chairs, I have never known a groupie-like audience that would stand up front and stare.

We were a two-piece band – Larry played bass drum and guitar while singing, and I played high hat, clavinet and mini moog while singing. We were loud (one person complained in Boston’s Inman’s Square Lounge, that we were “louder than a Boeing jet for Christ’s sake” I told him to fuck off and check out James Taylor who was playing down the road) – while we were hammering away in Hurrah that night, someone shouted up ‘Suffragette City” and we joked that David wasn’t here tonight. When we came off the stage, the snobby booker was standing there with two glasses of brandy in his hand and wearing a shit-eating grin: “Well David was here tonight, and he bought you these brandies, said to say he loved it, and was sorry he had to leave”. We had turned from the ugly ducklings into two swans – at the time Bowie was massive and, as usual, cooler than Antarctica. The joy that he gave us that night was immeasurable, and I believe that he knew the effect those brandies would have on that ‘too cool for his own t-shirt’ booker.

Today, as I was walking home from the gym I saw a Bowie poster crudely taped outside a Chinese restaurant. It had a black star at the top of it and under Bowie’s photo it said “New Album Out Now” someone had scribbled on it R.I.P. I tore it off the wall and took it home.

There was something eternally youthful about Bowie, even now that he’s dead, he seems young. Are you as shocked as me, to think of him lying lifeless?