Flying back in the snow 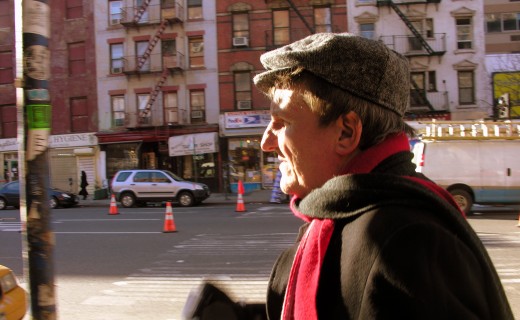 Flying back in the snow!

We were flying over JFK in the snow, Dublin had been a hairy experience, sitting at the departure lounge with regular ding dongs and muffled PA announcements. “Flight mmmmm to New York is cancelled”

“Which one did they say?” Clare, looking as worried as everyone else.

The lounge was looking pretty empty and those who were there; were scrambling to check the monitors to see what was going on. It turned out that most people from the canceled Air Lingus flight were transferred over to our Delta flight, and we took off pretty much on time, with me wondering why JFK was fit for us, but not for the other planes?

Now (seven hours later) I was getting the answer as we circled over Long Island, waiting for the one runway that was open to be cleared of snow. The Pilot had warned us that we only had enough fuel to hang around for fifteen minutes, and then we’d have to fly to Cincinnati! Fucking Cincinnati!!

“What was that song, by someone?”

“The Lights of Cincinnati, by Scott Walker, we used to do it in the Arrows, Dave Heenan sang it, Dave’s coming to the gig in the Harp, he’s retired now, stopped doing the cruises as a stand up”

“Well I’m afraid we have run out of time, so here is the plan that I have just received from the ground, we are to head for Dulles Airport in Washington DC, where we will put down and refuel. Once we have achieved that, it shouldn’t take any more twenty minutes, we will turn around and return to New York”

“ Jesus Christ, I was just about to run up there and tell him that was enough circling, I mean fifteen minutes worth of fuel”

Dulles, was dull, lots of anonymous jets sitting there with no logo’s, big tan coloured things, I wondered if they were Government, odd but not odd enough to be more than dull.

The Captain again, speaking in low frog range “We are just waiting for the oil truck to come and refuel us now, shouldn’t be too long, once they fill us up we’ll be out of here, about a half an hour or so I’d say” If he was any more relaxed he would stop.

On comes a female voice, full of outside world vigor.

“Hi my name is Madeline I am part of the Delta ground crew here in Dulles, while we are here, if there are any of you who would like to get off, please hold your hands up when I come round the Plane and I’ll do my best to sort you out”

Clare and I laughed, “Yeah right! Who’s going to just hop off the Plane here, I mean it’s not a fucking local bus”

Madeline, a tall young one with dark skin and a massive head of ragged energetic hair came through the cabin like a whirlwind, addressing those who were interested, and communicating with the ground through her mobile. To our astonishment a heap of people wanted to get off. So we sat there, with the cold fresh air coming in through the open cabin doors. A long queue of pale, over coated passengers formed along the isle with back packs and hand luggage, stacked up and waiting to get off.

Madeline; “ Those passengers who are getting off, your bags are now being taken off the plane, you can pick them up at the arrival hall, you may need to show your ticket tabs”

“What, Now we have to wait for their bags to get off” I felt like going up to Madeline and saying “couldn’t you have kept your mouth shut” we were getting cranky now.

Pilot; “ Well it turns out that the fuel guy was here, and just as he was about to fill us up, discovered that his tank was empty, so he’s gone back to get more fuel”

“Is he joking? I mean this wouldn’t happen on the Wexford Dublin Bus”

I decided to walk around, got talking to two flight attendants while looking through the open doors, one was a bald sixty something year old, he shared stories of insults that he received because of his age and lack of hair, one guy told him he looked like Kruschiev, another said, within earshot, is this old guy really working here? The Woman had put my guitar in the closet when I boarded.

“My husband plays guitar too, he has a six string and a twelve string”

“Great, everyone has more guitars than me, I really just use one”

Before I could answer, she jumped in.

“It’s a very specialized sound, you can’t play songs on it, it’s just for expression”

This was a very unusual way to describe it in my book, but couldn’t be bothered arguing. Still he was a nice bloke, and puzzled by her description.

“Have you ever heard a Band called the Byrds?”

“Yes of course, and how kind of you to suppose I am too young to not know them”

“Well I always assume that everyone is too young to know these things, anyway the sound of their guitar is an electric twelve string”

“Oh, yes I know that sound”

The Captain; “Well the Fuel guy is back, this time with a tank full, and he is now filling us up, however; we have been on the ground for so long now in the snow, the wings have gotten iced up, so we need de-icing, as soon as all that is done, we will close up and fly back to JFK”

I crawled back to the seat, disheartened.

“Oh no” said Clare. “I’ve been through de-icing before, it takes fuckin ages”

Another hour passed, I went up to look out at the de-icing, there was a black man in blue over-alls washing the inside of one of the jet engines with a mop. I decided not to tell Clare ( a nervous flyer) about that.

We figured out that by the time we got off the Plane in New York we’d be travelling for over eighteen hours.

Eventually we got out of that big smelly hot thing, and just in time, it had run out of food and booze.

So after all that, you better be planning on coming to the Harp on March 12th! ! (if you are in NY that is?)

Of course I’ll still Xove you if you don’t.

WHELANS !!!Dublin with the TABLES!!! For the first time in years at the top Indie club in Ireland-on Sunday June 25th at 8pm-this will be magic, tickets on sale imminently.

AND The Wexford St Iberius on Saturday June 17th – tix at the Wexford Arts Centre.

Also big news, BBC6 has been playing “Tantum Ergo” from Love cant Always Be Articulate” If you could drop a line of encouragement to this DJ I would really appreciate it. Stuart Maconie stuart.6music@bbc.co.uk

The BBC artist page for Pierce Turner. Find the best clips, watch programmes, catch up on the news, and read the latest Pierce Turner interviews.