Henry and Delores Part 2 of 3 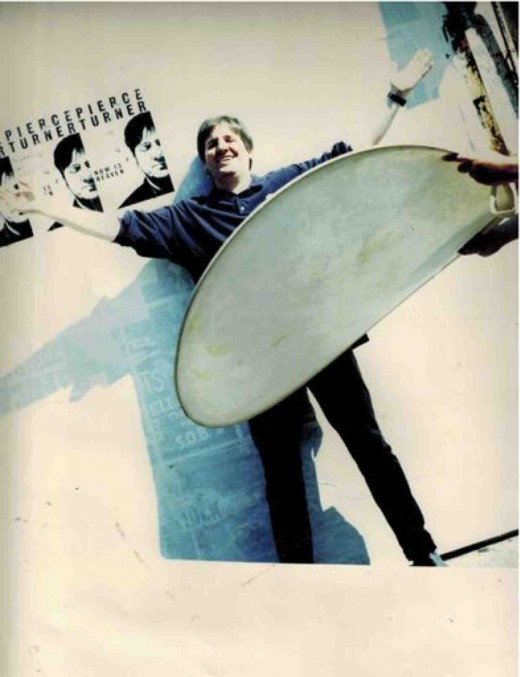 A French photographer that had been looking at me said it was magnificent and wondered could he come by the next day and photograph me in front of it. I still have the photo; I’ll rummage around for it (as you can see I found it). What fascinated Henry and I was that the plan worked! It was left like that until the gig the following weekend, completely untouched. Every day I would go by there and Henry would be sitting on his chair with his back to it, almost like he was guarding it.

Delores first came to Clare’s attention when she noticed her flying her clothesline over to the back wall behind her building. The neighbourhood was changing; some of the things that were allowed to happen in a community that shared a similar economy were going to be frowned upon soon by the upwardly mobile.  But in the meantime Delores was allowed to carry on using the washing line that Henry had hooked up many years previous to these times. The line went from the back of her building across to the old stone wall that traversed the end of all of the yards on our block.   One time we all had yards that were there for us to do what we liked with, some of us grew vegetables, and some of us kept our bicycles there or held the occasional barbecue. Now the landlords had given them away to whomever was renting the stores on the ground floor to sweeten the package.

Behind Delores’s and Henry’s building the Polish restaurant on the ground floor had built a wooden deck and turned it into a summer garden section of their restaurant. I often went there myself for breakfast; on a couple of occasions I stuck my speaker in the window and played a CD to accompany my coffee. They also erected large umbrellas to shield us from the sun. It was all pretty upscale for our neighbourhood, so long as you didn’t look up, if you looked up you would see Delores’s bloomers and Henry’s boxer shorts, and t-shirts, socks, tea towels and sheets, flying overhead. There was a system, one day it was her bras, the next time it could be Henry’s underpants, then came Delores’s knickers and so on, all done by hand incidentally, they kept their apartment in the same manner and style of its origin during their youth, no fancy electronics like washing machines, besides the plumbing and electricity couldn’t handle it. Clare and I always found the clothes line amusing, and loved how it kept things in place. Eventually however the restaurant put a stop to it and the line was lowered forever more, like a flag that signaled the end of an allegiance; No bugle reverie however, just eggs and coffee without that natural human eyesore of a clothes line over head – the beginning of a new more lucrative world in the East Village and the higher the rent, the fussier the tenant.

The fire escape for our apartment travels sideways along the back of our building to the adjoining ones. If there is a fire we are expected to scoot along to the next building and knock on their window ‘Excuse me, our house is on fire, may we go through your place?” For the most part we had no idea who was living in the adjoining buildings, except for now, we knew Delores and Henry, sort of. We were coming into our second year of Clare living in New York since she moved from London, and she had had her fill of living without her two cats, they were pining for her as well back there in London. Frankie was an old mutt tabby without a tail – which he had lost in a car accident, and with a bald spot on his back from the same incident. Alice was a Siamese that was born with some kind of congestive issue causing her nose to drip constantly, she was also going blind. Before I met Clare she was sorta married to Frankie, and used him to imitate Davy Crockett’s hat by placing him on her head with his tail-less arse at the front – he loved it; she also waltzed with him over her shoulder every evening after work. This cat adored her, and she him; she had gotten Alice, the Siamese, to keep him company while she was at work, and after an initial rejection he had grown to love her too, they slept in the basket with their arms around each other. Now it was time to bring them to New York.

Alice was a house cat and never went outside, if she did it was a disaster, she once went along the ridge of the London apartment building having escaped clueless through an open window, fortunately the neighbour gave her back, although she did question our ownership for a moment, originally she had cost 300 quid! But Frankie had been an outdoor cat, that’s how he was hit by the car, so Clare encouraged him to go out on the fire escape. He had a cushion there where he sat and looked out over the hood like a cat king. Delores took note of him as she pulled her wet clothes out over the Polish restaurant. This became a talking point with Clare when they met on the street, so Frankie gave us one more link to our charming octogenarian neighbours.

Sometimes months would go by without having contact with Delores and Henry, so it was never an issue if we hadn’t seen them. One day we ran into Delores as she was entering the building on her own. She looked harried and her constant smile was tainted with the gravitas of something troublesome. She held her hand to her mouth like she hoped to reverse the enormity of what had happened. We asked her how she was.

“He has been in the hospital for the last three weeks”, she shook her head in disbelief. “He almost died on me”.

“What? What’s wrong with him?”

“He had pneumonia and he was in an oxygen tent, thank God he’s on the mend now, but I really thought I was going to lose him, after sixty years living together, can you imagine? I just don’t know what I would do” Her words stood us still, it was easy to put yourself in her place, the inevitability of it, the loneliness that it conjured up drove a bolt through my imagination.

The worst was over now and she still managed to squeeze out one of her cute smiles. It seemed so strange, Henry had not shown any signs of illness at all; He appeared very strong except for a slight hesitance in his step. But this is the thing about age I suppose, younger people bounce back; later in life, it’s not so easy.

The following spring I was pleased to see Henry back in his chair outside the building watching the action on the sidewalk, bantering and joking with anyone that presented a suitable reason. He seemed a little less robust, but otherwise the same subtle charmer. The bodega on the corner found a new renter and it pleased us all to see lights and action brought back to that corner.   And then! I can’t say why – but in the same way that I don’t remember meeting Henry, I came to lose him. I thought that it could’ve been my own paranoia at first, or just a side of him that I didn’t know. After all there must have been so many parts of him that were unknown to me, he had actually never told me anything about himself, our relationship was entirely above surface, as I said, a series of guesses. I was walking up 11th Street just by Veneiros the famous Italian pastry shop – if it had been a busy street I wouldn’t mind, but there was just Henry and me. I saw him coming towards me and was already to make some kind of sociable remark designed for short encounters. He smiled as he came towards me with his slight arthritic hobble, it was beyond our usual territory, I rarely saw him outside our block.

He looked right at me! Wearing that same worldly expression, one eyelid less open than the other, olive skin scrunched, that incredulous smile, I waited for his response as he came inches away, but he kept going, and to my absolute horror; said nothing at all! I felt a cold wind cross my face as I walked on completely bewildered.