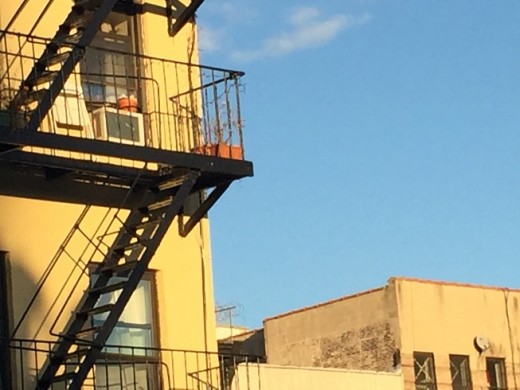 That evening I told Clare about what happened, and she was sympathetic, seeing that I was plainly upset. She had no answer however, and was just as confused as me, and surprised. I found myself searching through our recent encounters, looking for instances when I might have accidently blanked him during a walking daydream, or done something that he witnessed and disapproved. But it was a futile exercise, because we really didn’t know each other properly, and to boot, I wasn’t close enough to him to bring up such an intimate discomfort. We knew each other to see, and to exchange frivolous pleasantries, but we weren’t “in” enough to fall out. I just had to suck it up and hope it wouldn’t happen again. But it did! The next time he was talking to the Puerto Rican guy that owned the Bodega on the corner. Before it had closed he ran a pretty successful business there with his brother Peppi, however their replacement renter had made a mess of it and had to quit, leaving it boarded up for the best part of a year. Ironically, I knew Peppi’s name but not the name of his much friendlier brother. Henry was always pally with the friendly brother, and here they were having a right old laugh about something outside the now busy Bodega. “Goodnight” said I with the wave of my hand, doing the best I could to not seem hesitant – they both looked at me as if they were saying “do I know you?”

Now this is where you may begin to question this writer’s character: Henry’s second blank was a shock to me, but not the friendly brother guy, he had blanked me a couple of years ago after several years of charming exchange. I was so offended I didn’t bother with him again, he had always seemed like he loved himself too much – but not Henry, he was special. What in God’s name was going on?

The next time I saw Henry, I didn’t have any choice but to blank him too. Every time I saw him from then on was horrendously uncomfortable, and the hurt stayed with me for hours beyond. We continued to be friends with Delores however and I wanted desperately to talk about it to her, but couldn’t. The years went by, the cats grew older. Alice died at the age of nine; her genetic weakness had caught up with her. She was panting her last breaths on my lap when the young vet Jana arrived in her skintight checkered slacks, she kneeled down to look at Alice with compassion and on her way up she caught a glimpse of my escaping emotion. At first I hadn’t cared much for Alice, she was too scrawny with big ears and a rat’s tail, but with time I stopped being an asshole about her, she was just an innocent animal after all. Prejudice, as usual, was just an outlet for sanctimony. After living in New York for a few years Alice’s kidneys had begun to fail and the vet instructed us on how to give her dialysis. Every day we would hang a bag of saline water from a hook that I had screwed into a wooden shelf above the bed, and Clare would bravely insert a large needle into the folded skin on the back of her neck, going through this with Alice raised my affection for her considerably. Now I sat there rocking her as she reached for her final breath, extra torn because of my previous callousness towards her, her tiny life was slipping away on my lap.

Jana the vet gently laid Alice out on our bed where we had shared our fearful routine for a couple of months, however this needle was to be her last one. Jana was a sensitive generous person, and we became friends with her after that, bringing Frankie up to her at the Animal Hospital for his booster shots and any other ailments that he might have. One day we noticed that he was limping and hesitant about jumping up to the back window where we kept his cushion. Jana had him x-rayed at the Animal Hospital where she worked uptown. She had grown very fond of him over time, he was a strong gentle animal, and never caused a fuss, a sort of Zen presence.

The Animal Hospital is a very slick place, geared up for effortless financial intake. They take your animal with one hand and credit card with the other. An assistant in blue medical overalls took Frankie away while we sat on the red enamel chairs in the large waiting area akin to the waiting room in an upscale private clinic. It can be an entertaining place to sit if you are not worried about your reason for being there. If your attention is not taken by the sniffing of a large dog or a terrier, your curiosity is aroused by the site of exotic birds or something small like a gerbil or a budgie, cats, snakes, mice, rats, you name it, all carried delicately by their concerned owners.

I needed to call my manager about a meeting that was proposed for the following day. Things weren’t going well between he and I, he had recently handed me over to an assistant manager, and another artist with a squeaky wheel mentality seemed to be taking precedent over everything. I was speaking to his assistant when Jana sheepishly came over and softly pulled me by the index finger towards an enclosed room. Clare was already inside the small room sitting on a chair facing me as I entered, Jana seemed nervous and her sad brown eyes betrayed any professionalism that she projected behind her white coat. With a shaky hand she took a large negative out of a folder and clipped it into a box light up on the wall, She pointed at the black negative line of Frankie’s rib cage, inside it there was a cloudy mass of white, Jana pointed with a shaky finger “This white stuff is not normal, I’m so sorry to show you this, but this is – she stopped to take a deep breath and gulped – some kind of cancer” We stood there, all three of us, staring up at Frankie’s rib cage, hoping to stare it away. Normally in a situation like this, the doctor is the hard ass that keeps a check on reality, but Jana was not only a young vet, she was also a friend now, and as she had put it, had a crush on Frankie. Clare had said more than once that he was the love of her life (I didn’t mind, he’s a cat after all) and I loved the little bastard too, he had been sleeping on my head for years. But I hadn’t time to get emotional; the two women beat me to it. Clare started to cry,

“Isn’t there anything that we can do at all? I love him so much, he’s the best pussycat that I have ever had” now sounding like she was about six years old. Then Jana lost all control of her composure, I knew she had been holding it in, And I was holding on to mine for dear life in case….just in case.

“Well all I know is if it was my kitty……..” exploding tears like a burst water balloon, her face and frame now small and shaking. “I would give him chemo …. to … try and reverse the damage…or at least slow it down”

I tried to hug the two of them, as sad as the situation was, Clare and I caught each other’s eye and shared the hilarity of what was happening. Jana showing this kind of humanity meant that she was in with us for life, especially with Clare, vulnerability is the key to her heart.

Delores noticed that Frankie wasn’t out on his cushion so much anymore, and asked Clare one day on the street if he was all right. We were sitting in our kitchen when Clare told me, I had just received a box of new albums that Beggars Banquet had released called The Compilation, a “best of”. We reminisced on how long we had been aware of Delores and Henry, I had made around ten albums during that time period, and this was technically an eleventh, but why did Henry stop speaking to me? It was still a bewildering mystery. Clare said that I should go to him now and reach out by giving him a copy of the album.

“Just go down the fire escape and say hello to him, give him the album”.

Our kitchen window was wide open, it was a lovely summer’s day, and Clare had just waved at Delores, seeing her put a mop out to dry outside her own kitchen window. “Fuck it”, I thought, and swung my feet out through the window landing on the old wrought iron fire escape with its peeling green paint (the iron is thin and rusty and it crossed my mind that it must’ve been challenging enough for it to hold my two hundred pounds). I stepped over my next-door neighbor’s portable barbecue, dormant and unused, and held on to the railing as I veered past the old flowerpots with dead plants. I peered down into the dark kitchen, inside Delores was cleaning the small narrow stove with a brillo pad, and Henry’s sallow eyes looked up with incredulity from behind the newspaper in the corner by the back wall. Delores said “Hi” but he said nothing, just crackled the paper. The austere apartment harked back to a different time, linoleum floor, white enamel Kitchen table, with matching chairs, no music, no TV,  just a small Panasonic fan, dignified silence and cleanliness with available daylight cutting sharp lines in the shadow. I threw some words together with great discomfort and handed over my album as a peace offering.

“ I have no idea why we stopped talking, maybe I can just give you my new album as a token and we can be friends again”

Delores smiled her cute smile and reached up to take the album from my hand, she was sympathetic and maybe amused, but loyal to her man too, I could hardly believe what I was doing, it was a big gesture that fell to the ground like a drunken sailor in a strange port. Whatever I was talking about – and I’m presuming that she knew as little as Clare – she was not going to intervene. Henry said absolutely nothing, and I scooted back along the fire escape feeling even more of a fool now than before.

A couple of winters after that Henry died – Delores told Clare one day on the street that he had been hospitalized for several weeks with lung cancer. She carried on with great dignity and, amazingly, found a reason to keep her smile handy. She still maintains her apartment over Neptune (rent stabilized I presume). I occasionally see her buzzing around, if I don’t stop she doesn’t seem to be aware of me, but when I do she still has that cute smile and always seems to be going somewhere seeming to have plenty to do.

I will never know now what I did to turn Henry away, I knew of him for thirty years, but of course I never actually knew him, the most intimate thing we shared was falling out, that was as close as I got to knowing him. Maybe he was a friend after all, only friends fall out. You can’t fall out with someone you don’t know.

There are 2 comments on Henry and Delores Part 3