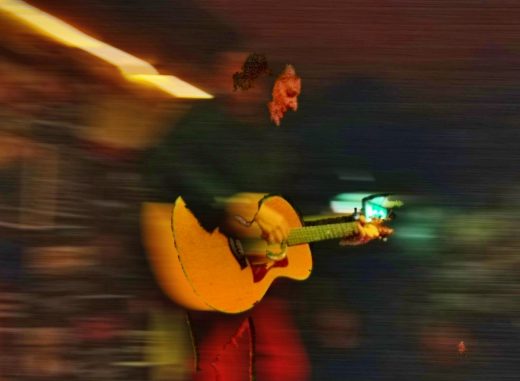 The first gig of this Irish Leg, Cork! Started off as sweater, and became a cracker. Good sweat though, Otis Redding sweat, Bruce Springsteen sweat, that kinda ting, ye know what I mean? Because we were late the last time I played there, we set off extra early

this time. We were late the first time because we got lost, Cork is a maze of one way streets, and I have no faith in my sense of direction anyhow. I did a lot of studying on the google map, and almost understood where Coughlans was. But we got lost anyhow. It’s on Douglas Street.

“Excuse me do you know where Douglas Street is?”

“Douglas Street?” scratches his head with the shopping bag hanging from his thumb

“Ara Now, it should be around here somewhere, I mean Douglas Road South is over there”

“ok thanks very much”

Eventually after many’s the dodgy looking housing estates (dodgy because they appeared to be going nowhere) and narrow one way hills, we landed outside IMRO’s Venue of the year. It was a truly brilliant night. Especially inspired, and funny!!

Then I went to see my home county hurling team beat Irelands toughest opponent Kilkenny, up at the Wexford Park, I love hurling, and this was a killer match. This Saturday (June 17th – 8pm) we will finish a perfect Wexford week at the St Iberius Church on the Main Street.   The 200 year old organ is so sweet, in this great Church, with its back to the harbour, one time the sea went right up to its back wall. The acoustics are incredible, and this may be my last gig there as it is hard work to organize. So if you want to experience this porous musical gem with our guitars wrapped in that beautiful organ played by Josh Johnson, with the lovely Paula Cox on vocals and percussion, Garvan Gallagher on Bass, Mick Egan on acoustic and electric Guitar, and Myself on Grand Piano and acoustic guitar, get your tickets at the Wexford Arts Centre.

This same line – up will also be at Whelans with me on June 25th, It is years since the classic gigs at Whelans when people hung from the ceiling and sang like football fans. They are bringing back the old classic wooden tables, so I can slide along them like a lunatic. The Irish Times did a special offer for this event, running an ad every day for a week. They also compiled these quotes from Irish authors. Come outa the house, you’ve been in there long enough.

And as if that’s not enough, I will return to London’s Slaughtered Lamb On July 13th Angeala De Burca will join me on fiddle, this is always a blinder, and happens rarely enough, God knows. Tickets at wegottickets

I need you, honest I do.

Joseph O’Connor; “Pierce Turner is a storyteller, soul man, poet, heartbreaker, with the voice of a choirboy high on rocket fuel. His songs sound like nobody else’s. A true and beautiful and utterly unique artist”

Kevin Barry; “For many a strange moon, Piece Turner has been creating some of the most indescribably odd and luminous and beautiful music anywhere – for the Old Weird Ireland, he is something close to a national treasure.”

Eoin Colfer; “Pierce Turner’s lyricism has had a huge influence on my writing. He is a one of a kind genius poet. I wish I had never heard him so I could listen for the first time. Pierce is the only songwriter I know who has made me laugh and cry during the same song”

Liam Fay; “Like his songs, Turner’s live shows are spellbinding: his grip on an audience is so tight he leaves fingerprints.”

Billy Roche : “Ray Davies meets Brian Wilson with a little pinch of James Joyce and you have it – the sublime taste of Turner!”

A Whelans review from The Irish Times;

“Clambering across tables little shimmies and clattering a smashing ashtray to the ground to the screams of adoration, Turner breaks sown the barrier between audience and performer and really gives himself in a way that makes him naked”