Before I start-something urgent needs to be brought to your attention if you are in Ireland-On January 16th I will be at the National Concert Hall (JFR Room) what else could have to do on a Tuesday night? I want to see all the sausages there, or what is the point? book here https://www.nch.ie/Online/seatSelect.asp 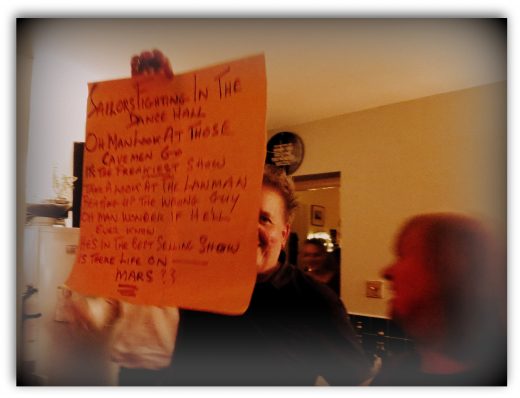 I walked into the spare bedroom and reached to turn on the light, but the light was already on. Strange discovery, but it happened before, recently enough. It’s not that I couldn’t see, I just wanted it to be brighter, even though I was only looking for a piece of cardboard to write a sign on.

We were having a New Years Eve Party, the musical theme was 1940’s. Having had several NYE parties in the past, I had no ambition to struggle through my music collection to find something fresh and contemporary, yet familiar, not too racy or noisy, that would suit a generational melting pot of all age groups and taste groups. The1940’s felt like a way to avoid all these issues, the music would be before everyone’s time, so therefore beyond debate. Yet, it was good fun, bopping along stuff – Glen Millar, Benny Goodman, and all that jazz.

As I was compiling the music, it began to feel a bit samey after a while. So I decided that it would be ok to stick in a bit of David Bowie, The rationale being that Bowie died in 2017, and that he was born in the 40’s. Just a couple of Bowie tracks “life On Mars” as a sing along “Let’s Dance” as dance along. But how many people know the words of “Life on Mars”? I don’t even know them myself. So I googled em and wrote the chorus out on a big yellow card board with a black sharpey. This part; Sailors fighting in the dance hall – Oh man, look at those cavemen go . I was a bit surprised, it turns out that I really didn’t know what the song was about myself.

New Years Eve. The kitchen table was pushed into the corner, the lighting all sexified, packed full of friends all swinging and swaying. When I produced that yellow sign everyone sang, even older people whom I’m sure had little or no knowledge of the song.   What a great party, how was yours?

I won’t pull that sign out at the National Concert Hall on January 16th-but there will be other signage. By the time we get to the 16th – January will be trying enough, and God knows Tuesday will be as dull as …….Tuesday. Except for where we will be, beneath that beautiful Chandelier in the company of Tuesday giants.

This is what a great friend wrote to his friends, please pass it on to yours.  I told my main muse Pierce Turner I would promote his gig in the NCH on 16/1/18 as a way to elevate spirits  early in the week early in the new year. details at

Reach for the light and make it brighter in 2018

I love you more than sage stuffing.