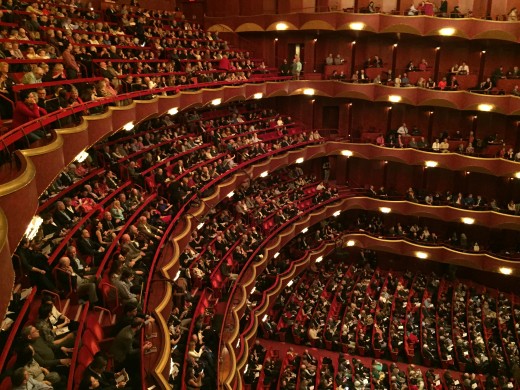 The flu came on Friday afternoon, my sister Bernie and her son Gareth arrived in New York on Sunday afternoon. We planned to prepare a nice Sunday roast for them as a New York welcoming. But I was a pale version of myself that day, the shivering had ceased, and the muscle pains, but I was limp and incapable of expending any energy. So we regrouped and decided to have a very New York delivery of pizza from Stromboli’s on the corner of St Marks Place. It was a good idea, and with a nice salad, we weren’t too glutenised. It was Gareth’s first visit to NY so he got a bit of a kick out of the large pie box sat in the middle of the table with its Italian motif.

On Wednesday we continued the Italian theme with an evening at the Met Opera House for Puccini’s Madama Butterfly – I adore Giacomo Puccini’s orchestration, and we sat way up high where (cheap seats) I could watch the orchestra following the masterful direction of the conductor. Puccini had come from a musical family, they had dominated the area – Cattedrale di San Martino in Lucca – where they lived for over 120 years, all church organists, one after another, and when Giacomo’s father died, his talented son was in line to do the same, but he was only six.

However, in his early twenties after going through the conservatory he did take over the organ for a while. As I said, I have always loved his work, but it’s been a while since I last witnessed one of his operas live. Many thoughts came to mind, firstly that the original Met had been built by the same man who created the church where I recorded my new album. Secondly, I could hear the organ in his orchestration, sometimes it sounded like a huge organ, with more moving parts of course. And then I thought about how I may have been sub-consciously seeking this while recording in the church, through the organ! It has such a human quality, with the wind blowing through its pipes, it can sound like flutes, or trumpets, or like a full ensemble.

This Friday morning, I took my family to the church to show them around. Madama Butterfly was still ringing through our ears when I sat at the organ and played an improvisation using an array of sounds, I was inspired, Puccini was in my heart. I believe that there is another album in this church. Madama Butterfly finally chased away the cobwebbed flu residue. Music has saved me once again.

If you are in New York maybe you can come share the love with us this Sunday 17th at the Harp 45th st and 3rd Avenue-6pm. It will be a special night I believe, after the Church and Puck Fair, there is magic in the air.