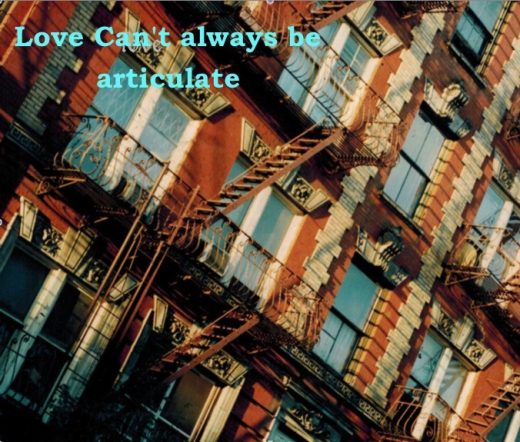 The front of my building.

Philip buzzed me in. Buzzers were a luxury then. Some of us had them, but they seldom worked. Most of us kept our keys in a thick, knotted sock. Outsiders would shout up at the window, and we would pitch the sock down to them. Every day without fail, I heard the same voice shouting up “Yo Howie” outside the building next to me, he would shout it repeatedly in a thick booming New York accent. Eventually Howie would throw down the knotted sock. I didn’t know anyone in that building to speak to, but I knew some faces, and had supposed some of their stories. Twice, the building caught on fire and they had to call the fire brigade. On both occasions Howie had fallen asleep with a cigarette on the go. The second time the building had to be evacuated at two in the morning. I looked out my front window to see a woman being carried down the Fire Escape in her nightie. Down below on the street, the entire occupants of the building were looking up in anguish. I knew most of their faces, and took a guess at which one was Howie. The one with the frail skinny body that I had decided was an alcoholic, struggled on his gout ridden feet to angrily accost Howie, he swung a wild punch at his clueless nuisance of a neighbor. Someone held him back while he shouted angrily at the bed smoker in Italian. Eventually the fire was quelled, the army of fire engines went home, and we all went back to bed. The next day I heard it again “Yo Howie” And the knotted sock hit the ground.

Greystones, The Hot Spot -Friday Feb 23rd at 8pm (last Irish date before returning to the States) This is a beautiful venue. Book here.