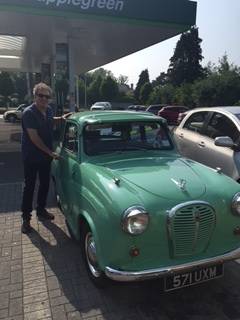 I’m not complaining or anything, maybe the amount of odd things that have happened to me concerning cars are just par for the course after several years of involvement with the four rubbered buggers. However the following is one of the more bizarre events that could happen to anyone through absolutely no fault of their own.

It all happened on a cold wet December night, we were fast asleep up on the third floor of our friend Dot Boswell’s house in London. I had played a gig the night before at a club called Ocean in Hackney. I find it hard to sleep after gigs, so when the moment comes, it’s nice if there are no disturbances, if the delicate balance is scuppered and a thought slips in, it doesn’t take long for one thought to couple with another, and before I can scream stop! to myself, there will be a football field of thoughts running amok in my head. Often this happens because of something relatively minor. A small sound, or a rogue ray of light will do it, so a gunshot would be more than enough I’m sure you can imagine.

I do know what a gunshot sounds like. I played in Northern Ireland as a teenager and witnessed a violent stand off between the police and protesting Catholics, quickly discovering my sprinting talents, when a smoking canister landed near my feet. I also remember kissing a Belfast girl when a bomb went off in the distance, the ground rumbled with manmade thunder. Another time – as I sat in a New York taxi on the corner of 12th Street and 1st Avenue – two guys started shooting at each other across the street behind me, it still seems imagined, I don’t recall even mentioning it to the taxi driver, the light changed, we moved on. So when I awakened in London to the sound of multiple rounds being squeezed out in rapid succession, I leapt out of that bed like a trained marine, taking cover behind the wall as I sneaked a look through the window for the source of my alarm.

I could hear the crunch of shattered glass and people shouting, what could it be? A shoot out between the police and who? It couldn’t be the IRA, that was all over, this was the 90s! There was something different about the sound, it wasn’t the same kind of pop that I had heard from past gunshot sounds (listen to me, I sound like a seasoned veteran) these eruptions were bigger and differed in volume, five or six in consecutive, then after a moment’s silence, a far bigger bang. All that breaking glass made it sound like there was a specific target that was being mercilessly hammered, I had to get a better look. I looked over at Clare, she was fast asleep under the covers without a care in the world, there didn’t seem to be any movement downstairs either, Dot and twelve-year old Jack were slumbering away. Lights began to reflect on the ceiling, the way they swirled suggested the police or an ambulance. My guitar was nearby in its travel case “not a bad idea, they say those cases are so strong that you could drop them from the top of a six story building, might it be bulletproof?” My curiosity was now superseding all rationale (See? This is how bravery comes to be, mindless curiosity!) I turned the case upside down so that the big part was at the top and peaked around the edge using it as a shield. Down to the left, blocking off the street was a parked fire engine with its yellow emergency lights oscillating frantically. The sight of a friendly authority gave me the courage to seek out the source of the commotion.

There it was down below in the middle of the road, a massive crater stretching across its full width and at the centre, a water eruption jetting with great power towards the sky, it had effortlessly ripped its way through the multiple layers of dirt, stones and tar that had been withholding it for many years beneath the ground, all those layers were now been dispersed every which way and not in a benign fashion, but with titanic force! Loud explosions were followed by the sound of damage being inflicted on their haphazard victims. Innocent by-standing cars parked over night along the perimeter were being mercilessly hammered with large stones travelling at frightening velocity. But one car in particular was getting the brunt of it all, bouncing on its springs, recoiling from each wounding blow, the roof dented, only barely hanging on. It was our poor little defenceless Renault 5. I hurriedly took the car keys off the side table, threw on a pair of trousers and shoes, ran down the stairs grabbing Dot’s PVC raincoat from her hallstand, put the heavy Georgian door on its latch, and ran to the edge of the danger. I stood there with my hood up grimacing from the downpour and helplessly watching the poor little Renault, I had to save it, there was still time, it was rescue-able surely! We were driving back to Ireland in the morning, I had to save it. The fire brigade!!! I ran up to it at the top of the street. Inside of the dark cabin, a fireman peered down towards me with a retired expression, he steadily lowered the window. I knew he was trying to calm me with his demeanour, and he partly did, but I still attempted to make him feel the urgency of what I was experiencing, regardless of his outgoing futility.

“Hello! That car over there getting most of the pounding, that grey Renault, is mine, can I get in there and drive it out of there, do you think?”

“Oh, sorry to hear that, no I’m afraid I can’t allow you to go near it, it’s a burst water main, very dangerous, we have had fatalities with these situations before”

The other fire men sitting behind him dressed in theit full gear, seemed curious about my dilemma and maybe my half Irish, half American accent. It seems to become more American when I am in a neutral country like England, not sure which way to go, it can choose either direction, sometimes in the middle of a sentence.

“Really!! But we are driving to Ireland in the morning” I pleaded; now almost talking to myself.

He was polite but firm. They seemed almost bored with this trivia, it looked like they would be sitting there all night with their arms folded, one face peering from behind him seemed incredulous, I supposed it was for my willingness to brave the flying rocks, in order to save a car.

I turned to face the scene in disbelief; the damage was increasing with every passing moment. The front windscreen was now battered in, the mirrors were smashed and the water was pouring in through the back window, this mains burst seemed intent on putting all its might into destroying Clare’s precious Renault 5, the first car she had ever bought brand new, it was her baby she said. She loved that car.

The next morning I broke the news to Clare, we looked out the window at the devastation, she took it well, considering, the spectacle of it all blew the setback out of the water – so to speak. Jack ran to get his camera and photographed the car from every angle. We were surprised that the engine started, but the stench inside was horrendous, it smelled like the bottom of the Thames. At that point the car was about ten years old, so the insurance company scoffed at the idea of mending it. We, however were still intent on fixing it up and driving to Ireland, after a few phone calls we found a place in Wembley, a long way from Dot’s house in Primrose Hill. We covered the side windows with plastic and tape and drove there without a windscreen. Other drivers looked down their noses at us as we shivered along, lowly beggars driving in a battered tin can. The seats were soaked in water, so we covered them with black garbage bags, there was one saving grace, the radio worked! so we listened to music at least as we brazened our way through the heavy London traffic.

Once we got the windows fixed we packed her up and headed off on the five hour journey to the Irish ferry in Fishguard, Wales.

I suppose we got used to the smell, but we had very uncomfortable sweaty bottoms from the garbage bags, I began to feel like a fish, humidity was everywhere. That cute little car, Clare’s baby, was now a holy show. There was no shortage of comical comments in Wexford when we got there “Were you in a shoot out?” “I’d like to see the other car!”

That poor car, just wasn’t meant to go to Wexford.

Please say something, squawk or squeal, inspire me, humour me.