My Father was a Fire Man 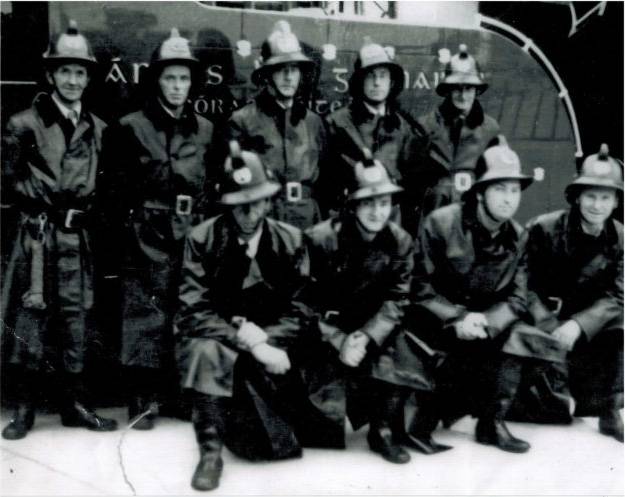 (Please let me know that you are out there, make a short comment, it can get lonely otherwise. And thanks for an amazing gig at Joe’s Pub).

My oldest sister Delores gave me this photo of the Wexford Fire Brigade for my birthday, it’s an unusual one that I had never seen before, my father Jem is the last one front right. He later became the Captain, and so we had the phone (incoming calls only).

My first legitimate musical experience was at the age of nine when I joined a brass and reed band in my hometown of Wexford in the southeast of Ireland.

We had just moved down from a fireman’s bungalow at the top of the hill to a three-storey house on the quay with a shop underneath it. My father had been a part-time fireman, while the other part of his time was spent working in Pierce’s Foundry as a turner, those names are coincidental incidentally. The bungalows up on Davitt Road came with the Fire Brigade. Ten semi-detached houses in a row all connected by a loud alarm bell to the Captain – Mr Crosby’s – house, he had the Fire Brigade’s telephone to the outside world. If someone wanted to raise the alarm, they would call him and he would press a button that would ring through all the houses. He would also turn on the siren in the fire station which would travel through the entire town and beyond. If anyone was at work it was understood that they had dispensation to leave. My father would hop on his heavy black bike with the iron spring saddle and make his way up the many hills on the way to the fire station.

My mother was an ambitious woman and she wanted to move up in the world, so we came down the hill. When we got down there she was a bit nervous about me and my brother Paddy hanging around with a rougher crowd down around the main street, so she got us off the street by having us join an all male Catholic brass and reed band called The Holy Family Confraternity Brass and Reed Band. Father Bernie was the main benefactor for The Holy Family Confraternity Brass and Reed Band and he was a very nice man, but he had an unfortunate style of sermonizing, instead of going up he went down, and instead of going down he went up. It made for an unfortunate effect upon the entire congregation bringing us to within a heartbeat of slumber.

Father Bernie got us involved in all the main religious occasions of the year, the biggest one being the Mary Queen of May march when we marched out to a grotto on the outskirts of town where there is a statue of the Blessed Virgin. I always thought that we were marching out there because she had appeared there but it turned out we were marching out there to try and get her to appear there. When we got out there, Father Bernie said mass in his usual sing songy kind of voice, and it was then for the first time in my life I came to an understanding of how horses fall asleep standing up.

After he had said mass we would turn around and start shuffling back into town. We sang hymns as we went along the way. We had a female choir and a male choir, the female choir were all dressed as the Blessed Virgin herself and the male choir were not. We sang hymns like Oh sacrament most holy, Oh Sacrament divine, all praise, and all thanks giving be every moment thine. Now it was turning into dusk and we lit candles as we came up the hill into the outskirts of town where people stood in a state of reverence at their doorways, and down to the folly where we dispersed, some people went for a cuppa tea and some went for a pint, but we all felt vindicated, we had done something for an hour and a half with absolutely no material rewards, and now we were floating on the security of tradition and the infinity of a silent conscience.

As much as my father liked being a fireman and the few extra bob that came with it, he soon packed up the house and followed us down the hill. On the evenings during the interim when he was obligated to stay there overnight, my mother would send one of us there to have his tea ready for him when he came home from work. I remember running down the hill in the dark having sliced the brown bread and cheese and laid it out on the small wooden table with a fresh pot of rich amber tea.

“Oh be the holy mack” he would say with discomfort, I knew what he wasn’t saying, he didn’t need to articulate his affection.

“You better go back home now, your Mammy will be waitin for ye”

There are 22 comments on My Father was a Fire Man