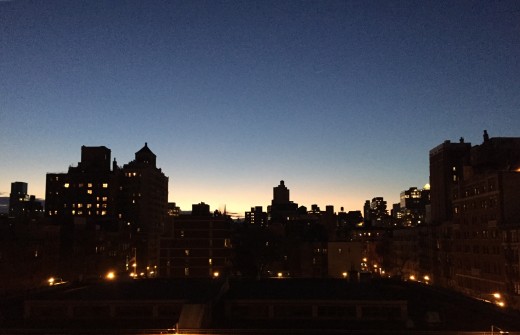 Thursday morning 11:07 it’s 85 degrees and 90% humidity, not sure if we should open the windows or keep them closed.  We’ve had the AC on all night in the back of the house where the bedroom is, and it’s nice and cool, but we don’t want to live in AC all day with the windows closed, Clare says its like living in a cave, and I agree.  She is heading out for a breakfast meeting and I need to work on the set for my gig at Joes Pub next Thursday, she suggests that I should go to the Italian cafe on the corner of 10th to get out of here.  As I’m heading out the door I am confronted with a dilemma; should I open the windows or keep them closed? For someone living in Ireland this is a no-brainer, but this is New York, in the centre of Manhattan.  When I came here first I remember being astonished when someone told me that they aimed their fan outwards in order to exhale the humidity, as opposed to blowing the air in. Humidity is the real problem here, not so much the heat, obviously you would only do this if you have no AC. The next best cure was to keep the windows closed, try and keep the humidity out, just grin an bear the dryer heat, that seemed nuts to me. Truth is if you don’t have an air conditioner you’re fucked no matter what you do, and I didn’t even have a bloody $26 fan at that time. Anyway I never bought into it, kept the windows wide open, and nothing moved except the mosquitos, not an ounce of air or wind. I just walked around in my underpants with the sweat dripping down my chest, hadn’t acquired shorts yet, went against the Irish grain, I found them a little embarrassing, or uncool, not David Bowie enough.

However now I’m a grown man, and I have AC! (and shorts) but I don’t want to have it on all day. So should I leave the windows closed as I’m going out, or close them? I decide to leave them closed and keep whatever cool air that is there within. I’ll re-appraise the situation when I’m out there; decide what I should do upon my return to the cave.

I push the tired old metal street door open – top-half cracked glass, covered from head to toe in graffiti – and there it is the force of damp heat bearing down on the half naked sweaty citizens hauling their tired arses along the pavement.  A tall unshaven man in a sweaty undershirt thuds his beaten body towards me, soggy denim shorts, off white socks and shapeless dirty sneakers, he has a long tired face, long hair in a ragged pony tail, ear buds attached to his phone and an old cloth bag twisted around his hand. He is an ugly unhappy looking bugger, almost dangerous, but probably not, he only has half of my attention until he makes an ugly leeching sound “chu-wawwwww” and casts his tired head downwards at two passing women passing him by.  Now with their back to him and me are two young women in their early twenties, I can’t see their faces, but can tell from their skin that they are young and that the one he is panting at, is black.  The two women completely ignore him, obviously used to this shit.  I am always astonished at this, I see this all the time in New York, big ugly looking assholes oogling women to their faces, what do they think; that they have a chance? That the women like this?  I try to imagine what it is like to be the woman, it seems like they are used to it as part of the daily routine in this city, I can’t imagine adding this to my life as part of the difficulty commuting in this overcrowded city.

Only once did I come close to this experience, it comes back to me now as I try to get inside the thoughts of these women.  Back in the eighties my friend Larry Kirwan and a guy called Jacque from Lyon used to bounce around New York bars looking for fun.  When our usual haunts were dull and too familiar, Jacque would exclaim “Gypse!!” imminently we would hop in to a yellow cab and head towards 49th and First Avenue where there was a cabaret club owned by a transvestite performer called Gypse, of course it was predominantly a gay hang-out, but that never even crossed our mind.  One Monday night with nothing going on anywhere, we swung into Gypse half stoned and up for the Craic.  Gypse was up on the stage, a tall skinny drag artist with a sharp tongue and wicked sense of humor.  We were glued to the stage laughing and yelping in support, when suddenly I noticed a table of men to my right, they were all staring at us, looking us up and down, one of them said ” alright…that’s more like it” I felt like a lump of meat, it made me withdraw and want to hide behind something, that is the nearest I ever came to what these women must feel like, and this guy was not being rude, he was doing what people do in singles bars, I can’t imagine experiencing that when I’m just popping out to get some milk.

To my surprise, the apartment was pretty cool when I returned, even without the air conditioner, keeping the windows closed had kept the humidity out, they were right all those years ago when I didn’t believe them.

Just rehearsed “Thunderstorm” with the full ensemble, including the original drum part with Mark Brotter, Andriette Redmann on Bass Synth, John Roksony on Guitar and Fred Parcells playing the original Trombone that he played on the album Now Is Heaven. Forget all the agony of the world, leave the heat on the street, and come to our love fest at Joe’s Pub in Manhattan on Thursday July 21 at 7pm.