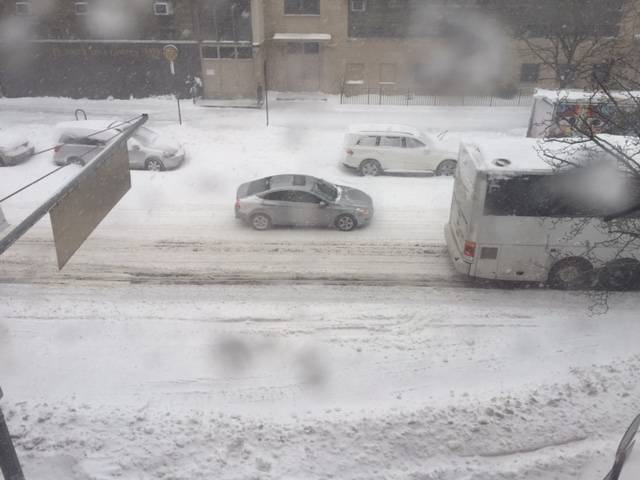 Today New York has been hushed by a blanket of virgin snow – this beehive city is slowed to the gait of a polar bear – and we are forced to make our hyper bodies halt beneath a blanket and just wait it out. Not sure why I need to write this blog,  am I just trying to get attention? I don’t think so, I also don’t even know if have your attention, or interest. Today I looked back a bit to see why I even began to do this, and found this story “Henry and Delores (hearsay from the East Village)” People say that a blog is supposed to be short and current, off the top of your head.  But that’s not what I had in mind entirely, I wanted to tell stories, and hone in on my writing a bit.  So here, in the snow, against all bloggers wisdom, I would like to give you a little story about my neighbours Henry and Delores.  Please let me know what you think. Pierce x

“Henry and Delores (hearsay from the East Village)”

I can’t remember exactly how he and I first spoke, it just seemed like we knew each other without initiation. I could tell that he knew I was a blow-in and also that he was retired from a good job that hadn’t been too hard on his hands or body; all presumption of course. Like all the other faces that I knew in the Village, Henry had become familiar through deduction. My curiosity had taken the information gathered from a thousand small encounters and logged it in the elaboration section of my mind – so close to the fact section that some of my suppositions fell in there by mistake. Nobody would die if I was wrong and we didn’t know each other well enough to have acquaintances that could loop my thoughts back to him decorated with trouble-making embellishments. So why not build a profile based on assumptions! Unfortunately Henry may have been doing the same thing with me, and somehow, somewhere, got a piece of rogue information, that later caused some disrepair between us.

Henry and Delores lived two buildings up from me on my small block, just after the mysterious Medina shop with nothing perceptible for sale and below the Polish diner called Neptune. He had always acted like he knew me, greeting me with a lop-sided knowing smile, he seemed to find me amusing without ever having shared our history. Of our course I found this very pleasant and tried to respond in a likewise manner. I often saw his wife Delores clutching her handbag and nipping along the Avenue with an agility that belied her age, she wore stylish black slacks and three-quarter length coats to match her permed hair and headscarf; making her look like she just walked off the set of Martin Scorsese’s Goodfellas. She too smiled like she knew and liked me. I knew she was Henry’s wife, I had seen him drive slowly up to the front of their building in a cream-coloured Cadillac, and sit there staring straight ahead, patiently being impatient as old husbands do. Eventually Delores would come out smiling, place her small weekend case in the back, and slide in on the leather seat next to her quiet man, nothing needed to be said because of the marital bluetooth between their minds. Later she explained to my wife Clare that on those occasions they were heading out to Long Island where they had moved with there kids many years ago – holding on to their old Village apartment because they still had a yearning for the East Village buzz – it kept them young and in love.

When the weather was warm Henry liked to bring a chair out to the front of his apartment building and sit there with folded arms watching the world go by. He treated the Village passers by the same way as he did me. And they often responded in a likewise manner. Bringing your chair outside is an old New York tradition that stems from the days when large families lived in crowded apartments with no T.V. to watch or air-conditioners to keep them cool, it was an extension of the apartment, a ground level balcony, so to speak. This was the world that Henry and Delores had come from, and still clung to, albeit with the forward momentum of optimists.

Henry must have known that I was a musician somehow; perhaps – unbeknownst to me – my Italian neighbours, or even my Italian landlord had spoken to him about it in passing, I suppose it’s feasible that us Irish and English blow-ins are included in the Italian network of gossip, it had never crossed my mind, I had always assumed that it was just us observing them! He certainly showed no surprise when he witnessed me wall-papering posters on the wooden partition barring up the closed Bodega on the corner. It was constantly covered in a rash of loud ugly concert posters; as soon as one row was pasted, someone else came along and covered them with theirs. Professional poster companies always seemed to have a monopoly on these closed up premises for as long as they were shut. They came around every day and replaced the ones that were covered; it was effective, and soon the punk bands playing in CBGB”s and the New Wavers from the Peppermint Lounge caught on too. Black-clad musos with spiky hair and bovver boots could be seen late at night, outlined by the yellow lamplight and glare of passing cars – trying to maintain a modicum of cool while carrying a bucket of paste and a brush with a pile of small posters – keeping a wary eye out for the cops, as they tried to gain attention on walls covered with massive music industry names.

The cops had been cracking down on the small clubs, issuing tickets to them if one of their bands had posted bills for their event, rumor had it that the mafia were involved in the bigger bill postings and they were allowed to carry on without hassle, charging handsomely for the service. I had done the midnight poster run too with the Major Thinkers, wearing the crappiest clothes I could find, my band partner Larry Kirwan watching out for the cops while I pasted. He would slap the poster on then, while I kept an eye out. The next day we looked like we had sex with an elephant, our clothes covered in hard wallpaper paste, massive swathes of white stains.

But now I was a solo artist, an older and wiser man, I knew it was a mugs game, there were so many posters all on top of each other, it was impossible to stand out.

Henry sat outside on the edge of the pavement looking inward for a change, perhaps to look at me. What I was doing certainly was different. I had a gig coming up in my friends restaurant/bar called The Pharmacy over on Ninth Street and Avenue A. They used white paper to cover their tables instead of tablecloths, they simply threw the old one out and replaced it with a new one torn from the giant roll in the Kitchen. I asked Jan, one of the owners, for six big sheets off the roller, and took them over to the closed Bodega on my corner. I borrowed a stepladder as well and with bucket and paste I covered the busy obnoxious bills with white paper, creating a visual silence that was beguiling by comparison. An auxiliary policeman came along scratching his head (they tend to be clueless).

“Oh I am just covering up this horrible eye sore.”

He stood back and lifted the front of his hat to appraise the job.

I then took three of my 12” x 18” black and white posters with the date written on them and put them in the middle of the huge white space. I had a hunch that if I did this, it would stick out, and that no one would want to cover it up. I climbed down off the ladder and stepped back to admire my work, Henry – who was out later than usual sitting in the changing evening light

He leaned back on the rear legs of his chair and nodded with finality.