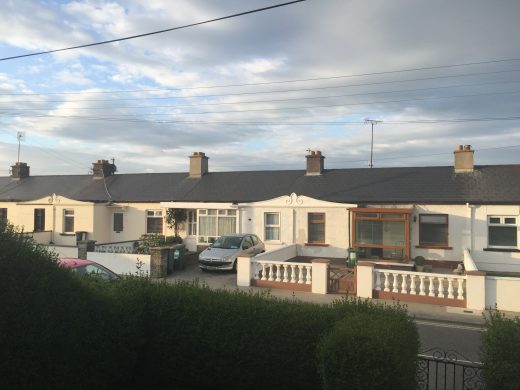 I remember when there was a hairdresser in my hometown of Wexford called Tony Myler, who gave gorgeous perms, he was known far and wide to be a terrific Permist. And he had an assistant called Kate whom he had taught his technique to, and Kate was nearly almost as good as him- and “nearly almost as good” was the standard in Ireland, at that time.

My Mother got wind of the fact that Kate was nearly almost as good, and booked her to come down to our house on a Monday night do a bit of perming on the side. She roped my three sisters into it too, so that she could get a job lot.

Kate arrived with her bag of curlers at quarter to seven just after the evening news. She went up into the sitting room and went at it hammer on tongs.   She permed the whole bloody lot of em! Anyone that was within reach, got permed.

I had nothing to do on a Monday night, and we had a boarder in our house from Cork who had nothing to do either. We decided to go upstairs and check out the goings on. We entered into that feminine terrain with great trepidation because of the smell of burning hair and sickly perm solution, but once we got inside there, the atmosphere was terrific.

The fire was blazing, they were all laughing and hooting and hollering, telling jokes, hopping around like Tele Tubbies with great big curlers in their hair, telling blue jokes. I was taken by surprise that my Mother was laughing at those jokes, I was not aware that my Mother had any knowledge of sex.

Kate had a friend with her called Joyce, and I couldn’t help but notice that she was a very attractive woman. Joyce started asking me questions-

“Where are you from?”

“Where did you grow up then?”

“And where do you live now?”

After a while they left and the cork guy and myself sat there looking at my mother and my three sisters on the couch appraising the job that had been done. I thought that they looked a little bit like four Irish Jimi Hendrix’s,

but I think that they thought they looked more like four Irish Elizabeth Taylor’s.

I was mortified, I wasn’t sure if I was supposed to be looking at girls yet, at fifteen and a half – I had never talked to my mother about girls, but I noticed out of the corner of My eye that she seemed a little chuffed.

That Thursday I went to my first dance in the parish hall. I entered into that place with some trepidation too, because of the smell of all the different aftershaves and perfumes mingling with cigarette smoke, which curled up around the huge mirror ball that  had a big blue spotlight shining on it-sending little blue satellites all around the room.

Up on the stage in a blaze of lights, a live Band played an old soul classic.

I was in a state of awe, when out of nowhere came Joyce, she took me by the tip of my index finger and pulled me out onto the dance floor.

It’s not easy to dance like that I can tell you, eventually she let go of my finger, and we danced all night long.. and… I took her home, and… I kissed her..and I had very little experience kissing, but she was well used to it, she nearly choked me ! Of course she was nineteen. (I forgot to say that) That night I went home on the wings of a dove, a man in love, for the first time, I seemed to have a girlfriend.

The following Thursday I went back to the parish hall again, this time I entered with less trepidation, but as soon as I got in there, it was plain to see, everything was going to be very different.

Joyce was already up on the dance floor wrapped around another guy, I went around the other side to get a look at him, hiding behind people’s heads. She was wrapped around him so hard I couldn’t see who he was.

I went over to the other side of the hall to see from there, and still couldn’t.

Then I went back to the front, and hid behind someone so that she wouldn’t see me looking, finally I saw him, he was a sailor home from sea. I knew him too, he was a merchant seaman. Wexford is full of merchant seamen, they are very confident blokes who have been all over the world. They’re always goin on about how beautiful the women are in Guatemala, Yokohama and Panama. I knew he was never going to let go of her.

For the rest of the night I sat there downhearted, and the band played all these old romantic songs that I never cared about, but now I understood them, they were singing in a language that I had just learned.

I went home that night brokenhearted. The following day a mutual friend told me that she said I had been following her around all night long like a lapdog.

I was angry now and decided to get over her, you can do that kind of thing when you are fifteen. When time moves very slowly, when a day last for a month, and a month last for six months, when six months last for a year. You can get an awful lot done in no time at all. But I have to say this;

she did put me off Perms for the rest of my life.