I’m back from County Clare, it’s four and a quarter hours from there to here.  Bernard, who was hosting the gig in the old reformed school house in Maghera, warned me that there were several Maghera’s and that everyone gets lost looking for his place.  This information put me into a bit of a panic, because Mike and I are now known throughout the world as the team who always get lost.  I went straight to Clare (my wife, not the county) with this issue and pleaded for help, she is pretty good at this kinda thing.  A day later Clare handed me my phone and said that she had programmed Maghera into it.  And yes there was one in Northern Ireland, and not to worry, this was the right one.  She had tried putting in St Stephens Church, which was next to the Old School House, but Mrs Google said NO!  Happy with Clare’s assertion that we were covered, I left it at that.

First we had to get to Limerick, that was easy enough, and then we turned on Mrs Google.  She sounded confident and even though she speaks with an American accent, she seemed to know her way around County Clare well enough.  She told us we were an hour and ten minutes away from Maghera, great said I to Mike, we are going to be early!

The road signs began to indicate names that Bernard had mentioned in his warning about the different Maghera’s, there’s one up on the mountain too, he said, “Where there is an R.T.E mast, but we’re nearer to Tulla”  Said he, and I was heartened to have seen a sign for Tulla.  Now the road was getting narrower, and the sun began to descend behind the silhouetted trees and muddy sky.  Tulla became nearer and nearer, and I cheered Mike on. “We are really close now” says I.  “Only five kilometers to Tulla”  “wee-haw” Cried he from behind the wheel.

Several clicks later Mrs Google gave us a new command “Veer slightly to the right in two minutes” What happened to distances I thought to myself, shouldn’t it be a hundred yards or whatever?  Then there it was, a kind of slide to the right, we took it and descended down a small hill.  This was a very narrow road, only fit for one car really, an S.U.V came towards us with the attitude that we were invisible, we pulled into the ditch, my passenger side buried itself in the wild thorny bush, we heard an aggressive thump, the S.U.V hadn’t bothered to slow down as he banged our side mirror back and went upon his way.  We had been climbing hills for a while on our previous narrow road, now we were climbing again on an even narrower one.  Bernard did say that he was a good bit out.  On we went for about fifteen minutes, and then Mrs Google instructed us to take another right in a couple of minutes.  This was a different matter completely, as soon as we turned on to it, we could see that it was a whole other class of ruggedness, we expressed some consternation out loud to each other, but like the good lapsed Catholics that we are, went onward.

It was a down road, pitch dark with pools of mucky water and undisturbed rocks, in fact the road appeared undisturbed, like maybe no one ever went near it.  We kept going, Bernard did say it was a good bit out.  We came to the bottom of a muck hill in a swamp, and were on our way out of it while praying, when Mrs Google said “You have arrived”  “What?? Are you fucking joking me!” There was nothing, more of nothing than I had ever seen.  Empty black fields behind stark briary bush, scarecrow trees, Mucky ground, mucky skies, and a lonely moon that badly needed charging.  We were alone in the middle of a black and brown nowhere, and suddenly it felt a bit frightening, could we get out of there? And if we could, where were we? Why was Google maps saying that this was it?  I got out just in case, to take a look across the fields, maybe this was it?  Bernard did say he was a good bit out, Nope, not a light or a lamp to be seen for miles.

We needed to turn around and get out of there, how? Mike remembered that there was an old gate back there where we could probably turn. We were backing up through the slippery mud and deep puddles, when Mike said he wasn’t sure if it was front wheel drive or rear, panic again.  I got out and directed him, slipping in the muck and covering myself in it.  We turned around and made it back to the road, where a man was building a new house in the dark with a floodlit digger.  “We were in the middle of nowhere” said I to him like a broken man.  “Well you’ll have to go back to the middle of nowhere agin”  Said he in a thick Clare accent, pronouncing Maghera “Mowra”  I put St Stephens Church into google, and this time she recognized it because we were so near.  We found it! and now I have to stop and rest. Phew!

There were French people there from Bordeaux someone from Germany, a woman from Wexford, solicitors, accountants, film makers and musicians, and Sally the cute little Jack Russel, and Martin Hayse’s cousin who told us that Martin lived right where we had landed by mistake, in the middle of nowhere. This is a photo of the gig.  They say the Wesht is Besht. 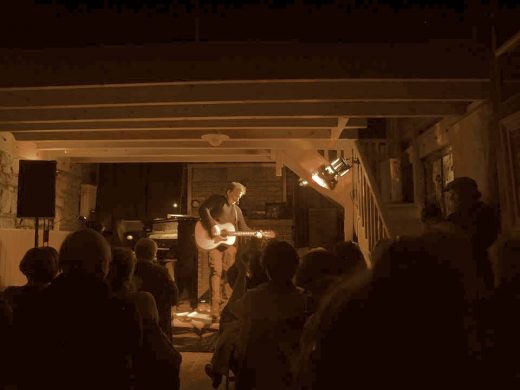